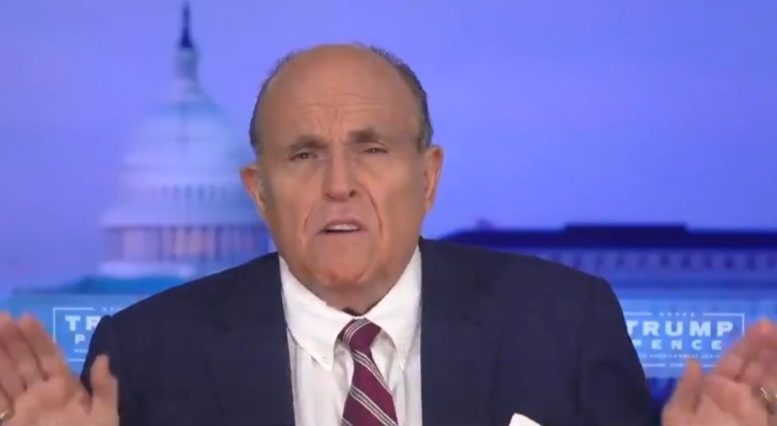 President Trump’s attorney Rudy Giuliani is now implying that votes that were cast in up to 28 states were sent to two foreign countries when being “calculated and analyzed” due to the Smartmatic software that is found in Dominion voting machines used in the 2020 election.

“Our votes in 27,28 states that are counted by Dominion and calculated and analyzed — they’re sent outside the United States. And they’re not sent to Canada. They’re sent to Germany and Spain,” Giuliani told Lou Dobbs.

He continued, “And the company counting it is not Dominion. It’s Smartmatic which was a company that was founded in 2005 in Venezuala that was invented for the specific purpose of fixing elections — that’s their expertise…how to fix elections. They did it a number of times in Venezuala, they did it in Argentina, and they messed up an election…fairly well in Chicago. And there’s a whole Congressional record you can go look at about what a terrible company this is.”

“That’s the company that was counting and calculating on election night, and they did all their old tricks,” Giuliani declared. “They stopped it. They also switched votes around subtly…maybe 10 per district so you don’t notice it. They got caught in Atrim County (Michigan), which is how we found out about it.”

“We are in the process now of investigating in great, great detail, but just a mere fact that we have a foreign country — we have this in a foreign country, done by friends of an enemy of the United States, Maduro. It’s outrageous! It has to stop immediately!” he exclaimed. Video Below

Sen. Hawley: ‘The Clinton Campaign Was Really Just a Criminal Enterprise, Which Is What We’ve Known All Along’