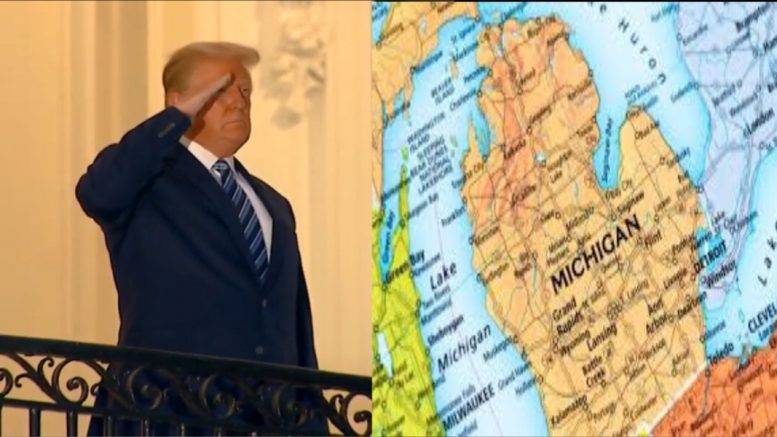 During the meeting, Palmer said she would be open to certifying the election results for some jurisdictions but not Detroit and others that recorded unexplained discrepancies. The board is comprised of four members — two Democrats and two Republicans.

Just minutes after the Republican members voted against certifying the results, the Michigan Republican Party released a statement from Laura Cox, who chairs the state party. “I am proud that, due to the efforts of the Michigan Republican Party, the Republican National Committee and the Trump Campaign, enough evidence of irregularities and potential voter fraud was uncovered resulting in the Wayne County Board of Canvassers refusing to certify their election results,” Cox said. Continued Below

The Commander in Chief responded to the news of Wayne County in a series of tweets Tuesday, first expressing, “Wow! Michigan just refused to certify the election results! Having courage is a beautiful thing. The USA stands proud!”

*UPDATE* Fox News‘ Shannon Bream reported that Wayne County Board of Canvassers has now unanimously agreed to certify the results:

BREAKING TWIST: Attorney on the ground in MI tells me Wayne County Board of Canvassers has now unanimously agreed to CERTIFY the results and called on SoS to conduct an audit … He says – “Apparently a lot of threats and pressure and they caved in.” More on @FoxNewsNight

With the certification by Wayne County, the results will now move to the State Board of Canvassers, which also has two Republicans and two Democrats as members.

Over 100 observers have filed affidavits related to the vote counting process in Detroit. Several individuals have alleged ballots being counted multiple times, ballots arriving in the dead of night, and observers being blocked from watching the tabulation process, Breitbart reported.

Jenna Ellis also reported that “40 Michigan state legislator sent [a] STRONG letter to [the] Secretary of State Jocelyn Benson demanding [an] audit and ‘every legal vote must be counted'”, attaching a screenshot of the letter.

(Related: McDaniel Slams Dems Silence Over The Blocking Of Poll Watchers: “If You Have Nothing To Hide, Why Won’t You Let Us Watch”)