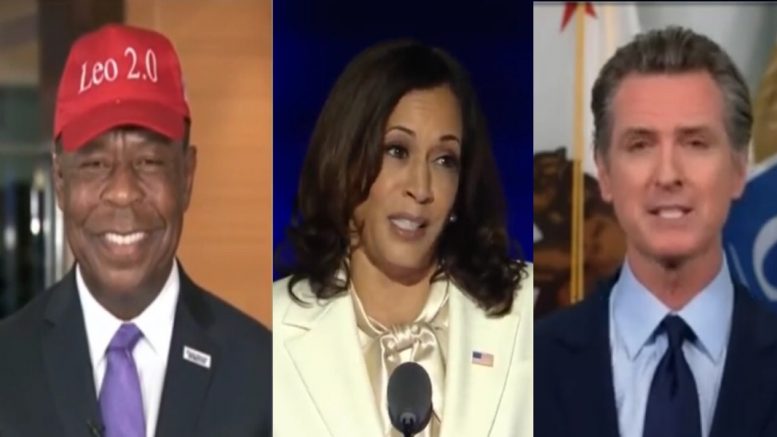 According to the Sacramento Bee: “At a press conference Friday, members of the California Legislative Black Caucus nominated U.S. Rep. Karen Bass and U.S. Rep. Barbara Lee as candidates for the position. Bass and Lee represent “two of the most powerful women” in California, said Assemblywoman Shirley Weber, D- San Diego and chair of the caucus.”

California allows the governor to appoint a senator to fill a vacant seat until the next statewide general election, one of 37 states that do so, according to the National Conference of State Legislatures.

Senator Kamala Harris, however, has yet to resign from her seat, though she would resign in the Senate before she takes the oath of office on January 20, should her and Biden be confirmed as the official winners of the November election.

“Attention Gavin Newsom. Appoint me to fill Sen. Kamala Harris’ Senatorial Seat. If appointed, I will adopt all of [President] Donald Trump policies. I await your decision. #Trumpforever!” Terrell tweeted on Monday.

In another tweet, Mr. Terrell again urged the California governor to appoint him to the “unexpired” senate term.

“I am seeking appointment of Sen. Kamala Harris’ senatorial seat. I will adopt Trump policies in California. Gov. Newson, appoint me to fill the unexpired term. My goal will be to turn California ‘Red’ Vote #Trumpforever,” the civil right attorney wrote. Continued Below

Attention @GavinNewsom. Appoint me to fill @SenKamalaHarris Senatorial Seat. If appointed, I will adopt all of @realDonaldTrump policies. I await your decision. #Trumpforever! @newsmax @seanhannity @seanspicer https://t.co/3pi59YYGAc

I am seeking appointment of @SenKamalaHarris senatorial seat. I will adopt Trump policies in California. Gov. Newson, appoint me to fill the unexpired term. My goal will be to turn California "Red" Vote #Trumpforever @realDonaldTrump @OANN @BlackVoices4DJT @seanhannity

In another tweet on Monday, Terrell responded to a local California news anchor over why he should fill the senate term:

I will respond with the following facts: (1) No Blue wave (2) Democrats lost seats in the House. (3) CA Prop 16 lost (No Systemic Discrimination) Republicans gain State Houses. You want more Elex. I have more ! @Elex_Michaelson https://t.co/jTDNZ7uiMx

Interestingly, Senator Kamala Harris tweeted on Sunday for help “to fund the legal work necessary to protect every vote”:

Trump and the Republicans are trying to dismantle our decisive victory with baseless lawsuits. We need your help to fund the legal work necessary to protect every vote. If you can afford to, contribute to the Biden Fight Fund today. https://t.co/JkMqdDWsZu

Meanwhile, California Assemblyman Kevin Kiley (R-Granite Bay), however, said that Governor Gavin Newsom is again overstepping his authority with “what he describes as the ‘cattle call’ of installing a political ally in the U.S. Senate.”

“The Constitution says California voters would decide who completes Senator Harris’ term,” Kiley said. “Even after being restrained by our courts for exceeding his authority, the Governor is once again trying to claim for himself power that resides with the people of California.”

I've submitted a Legal Opinion Request to the Attorney General on Gavin Newsom's authority to appoint a U.S. Senator. As the Governor revels in the "cattle call" of installing an ally, he's again claiming for himself power that resides with the people.https://t.co/qBaIBHJx7I

The Washington Post reported that Newsom is being urged to appoint a Latino to replace Harris. According to the story, Newsom may be considering California Attorney General Xavier Becerra and Secretary of State Alex Padilla.

Others who could be considered for the post, according to The New York Times, include Rep. Adam Schiff; Mayor London Breed of San Francisco; Rep. Barbara Lee; State Senate President Toni Atkins and Rep. Ro Khanna.

Los Angeles Mayor Eric Garcetti could also be on the list. He was a national campaign co-chair for Biden. Eleni Kounalakis may also be considered. She is the state’s first female lieutenant governor and once served as President Barack Obama’s ambassador to Hungary.