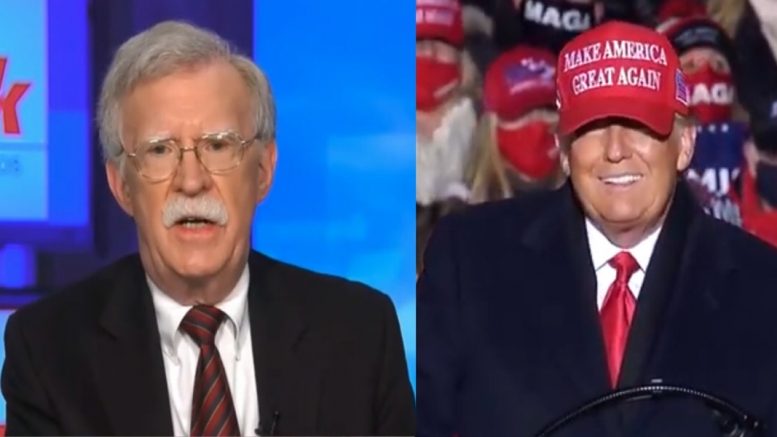 “I think it’s very important for leaders of the Republican Party to explain to our voters, who are not as stupid as the Democrats think, that in fact, Trump has lost the election– that his claims of election fraud are baseless,” Bolton told co-anchor Martha Raddatz during an interview on ABC News’ “This Week”.

“I think as every day goes by, it’s clearer and clearer there isn’t any evidence,” John Bolton claimed. “But if the Republican voters are only hearing Donald Trump’s misrepresentations, it’s not surprising that they believe it.”

“It’s critical for other Republican leaders to stand up and explain what actually happened: Donald Trump lost what, by any evidence we have so far, was a free and fair election,” he alleged.

Bolton suggested that Republican leaders are “getting ready” to recognize Joe Biden as president-elect, adding, “I’ve said, I think this is a character test for the Republican Party. I don’t buy the argument that Donald Trump has hypnotized Republican voters or that they’re not capable of accepting the truth. This is a myth that’s being perpetuated that is simply not true. But it requires people to explain what happened.”

“The Trump campaign simply has no evidence. Their basic argument is ‘this was a conspiracy so vast and so successful that there’s no evidence of it’. Now, if that’s true, I really want to know who the people are that pulled this off. We need to hire them at the CIA. The fact is, this is all blue smoke and mirrors, and I think people will accept that if they see leaders they respect, explain it to them,” Bolton said. Continued Below

Asked what does it make of President’s Trump’s refusal to concede, the former national security adviser said, “If he had any character, I would say it’s perfectly in character. It displeases him when reality doesn’t conform to the image that he has of it. I do not expect him to go graciously. I do expect him to go. But pretty soon, I think we’ll get the stab in the back theories, we’ll get the dark conspiracy theories continued, and he will make life as difficult as he can for the incoming Biden administration.”

The Commander in Chief fired back at John Bolton in a tweet on Sunday, writing, “John Bolton was one of the dumbest people in government that I’ve had the ‘pleasure’ to work with.”

“A sullen, dull and quiet guy, he added nothing to National Security except, ‘Gee, let’s go to war.’ Also, illegally released much Classified Information. A real dope!” the president expressed. Video Below

The Commander in Chief also declared on Sunday, “I concede NOTHING!” Meanwhile, Twitter attached a label to the president’s tweet.

(Related: Rep. Jordan: Dems Spent 4 Years Investigating The Russia Hoax But Don’t Want To Spend 4 Weeks To Investigate The Integrity Of This Election)