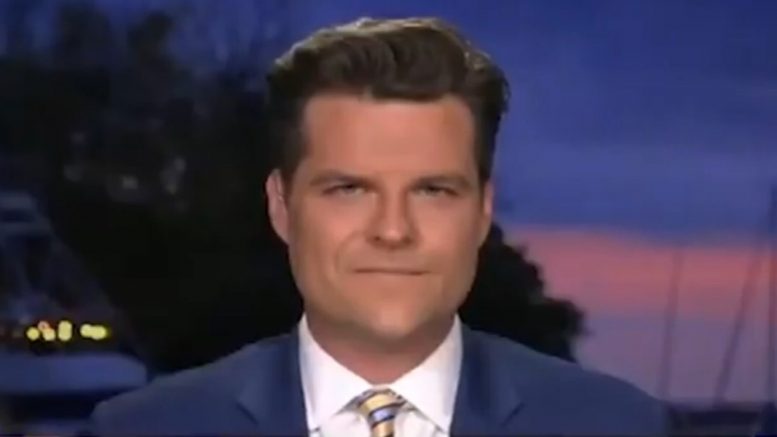 Rep. Matt Gaetz (R-FL) on Thursday, spoke with host Greg Kelly on Newsmax, discussing allegations of voter fraud in multiple states, in the wake of the post-election.

“I’ve spoken to the president recently, and he is built for the battle. He understands if we don’t fix these problems now, Republicans may never win another election again,” said the Florida congressman.

“We know that dead people don’t always vote, but when they do, they most certainly prefer to vote by mail,” Rep. Matt Gaetz said, amid reports of dead people who mysteriously cast a vote in the November presidential election.

“As we bounce some of these voters in some of these swing states off of the national change of address database rolls, we’re all seeing tens of thousands of illegal votes cast where people in Georgia, Pennsylvania, Arizona– literally manifested their intent to move out of those states and then cast ballots in those states that were counted,” the Florida representative explained.

Rep. Gaetz also said that in the state of Pennsylvania there is “something called the Dorothy effect in the data”, and clarified: “In the year 2020, more people over the age of 90 registered to vote than in the four years previously combined”.

He added: “Now either you have to believe in the middle of a pandemic there was this explosion of interest in people over the age of 90 registering to vote, or this evidence of ballot laundering, mechanized fraud, and I think we can prove that fraud. I think the question is will we be able to do it quickly? And will we be able to show sufficient scale to demonstrate there might be a different outcome than the media wants the American people to believe?” Video Below