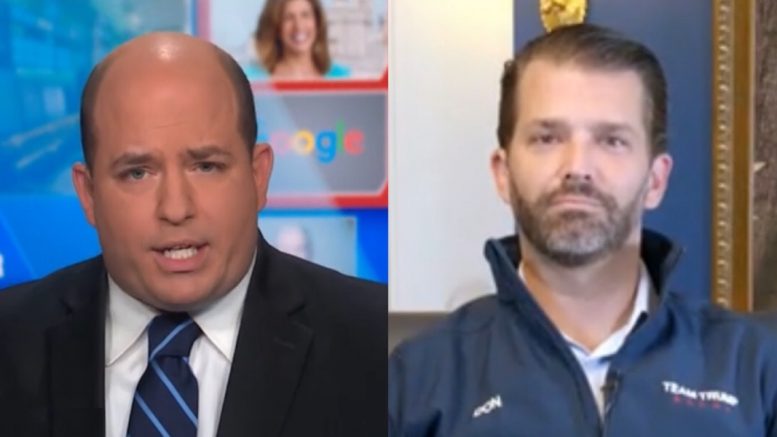 At one of President Trump’s final rallies on Election Eve in Kenosha, Wisconsin, Donald Trump Jr. had joined his father, thanking the crowd for their support and said in part, “Unlike the Bidens, we don’t have a mainstream media that will campaign for us. We have to do it ourselves.”

“We need you to get out and bring your friends to vote tomorrow, and when we do, we cannot only keep making America great again,” Don Jr. added, “but we can make liberals cry again!”

On Tuesday morning, CNN’s Brian Stelter tweeted an article over the remarks Donald Trump Jr. made, taking a jab at the president’s son for saying “make liberals cry again”.

“Try to imagine one of Biden’s kids talking about ‘making conservatives cry again’, Stelter said with the attached article.

“Real quote from Don Jr. last night: By voting, ‘we cannot only keep making America great again, but we can make liberals cry again!'”, the host of the CNN’s “Reliable Sources” added.

“Don’t worry you won’t hear from Hunter Biden because he’s too busy selling out America to China, Russia, Ukraine, Kazakhstan, and probably many others,” Don Jr. said.

“If you actually were journalist you know about these scandals 🤡,” he informed Stelter.

On Halloween, Brian Stelter analyzed The New York Post’s story over former Vice President Joe Biden’s son, Hunter Biden, and suggested the anti-Biden narrative was manufactured and indicated that the emails were “tied to Russian disinformation”. Continued Below

Try to imagine one of Biden's kids talking about "making conservatives cry again."

Don’t worry you won’t hear from Hunter Biden because he’s too busy selling out America to China, Russia, Ukraine, Kazakhstan, and probably many others. If you actually were journalist you know about these scandals. 🤡 https://t.co/JRA5FFqq0E

Last week, Donald Trump Jr. slammed bureaucratic insiders and the mainstream media in wake of reports that the FBI currently has an active criminal investigation into Hunter Biden and his associates.

As reported by Sinclair Broadcast Group, a justice department official has confirmed that the FBI opened up a criminal investigation into Hunter Biden and his associates back in 2019, focused on allegations of money-laundering and that the probe remains active.

So the FBI has been investigating Hunter and his corrupt partners since 2019 and no one said anything. No one brought this up, allowing a guy like Joe Biden who could be totally compromised to become the Democratic nominee?

Disgraceful. Anything to protect the Dems!!! https://t.co/4QU3lVBWSe

So the FBI has had an active money laundering investigation into the family of the Democrat Presidential Nominee since 2019 where there are credible witnesses saying that Joe Biden knew all about the dealings and the main stream media will still not cover it?

(Related: Biden: “You Won’t Have To Worry About My Tweets When I’m President”; Don Jr. Responds: “You Couldn’t Figure Out Twitter If You Wanted To”)