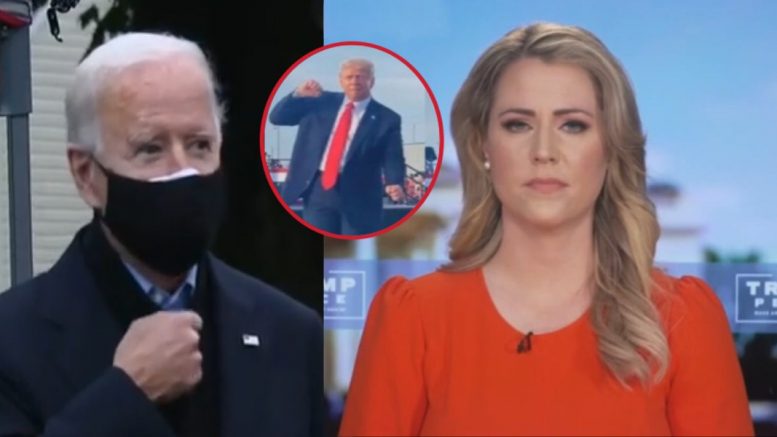 Biden campaign manager, Jen O’Malley Dillion, claimed “under no scenario” can President Trump declare a victory on election night. “We won’t have all the ballots that will be counted when the polls close, and we won’t even have them all on election night. … And it is no different than any other time, and that is not something that Donald Trump should make you think is bad or wrong. It is the way it works,” O’Malley alleged.

Trump 2020 Principal Deputy Communications Director, Erin Perrine, shredded the Biden campaign during an interview Tuesday on Fox News‘ “Outnumbered Overtime”, along with firing back at Democratic presidential candidate Joe Biden after he told a reporter, “The president is not going to steal this election”.

Reacting to what Jen O’Malley Dillion had said, Erin Perrine sounded off, saying,” I think she is being completely disingenuous, and actually she is spreading disinformation there by saying this is how it’s always been done. Democrats across the country have been trying to undermine the election integrity in the United States. In Nevada, they just changed their election laws, so for her to try and say this is how it’s always been, is a flat out lie.”

“But we shouldn’t expect anything different from the Biden campaign there. You see them saying President Trump cannot win tonight. That’s a lie– saying this is how elections always work, that’s a lie. There’s nothing about that– that’s being honest with the American people. Listen, President Trump has been unequivocally clear; we want to make sure the rules are clear and concise, so the American people know how to vote. There is a deadline, it is Election Day and that is today,” Perrine explained.

Joe Biden on Tuesday told a reporter, “The president is not going to steal this election”, when asked if President Trump possibly declares victory on Election Day.

Perrine responded to Biden’s remarks, firing back, “Well, I’m really sorry for the American people that they have listen to Joe Biden lie to them like that. It’s unbelievable that he would try to say President Trump is trying to steal this election, when President Trump is protecting election integrity and the fabric our nation with the work he has done to do so.” Continued Below

“Joe Biden and Democrats are those that are trying to allow for ballots that are not postmarked in states to come in and be counted for over a week afterwards in some of these states. There is a deadline. It is the election; it is the first Tuesday after the first Monday in November. That’s how our country works. And every state gets to choose what format works best for them. But Democrats trying to change the rules and up end the process here to try to be able to cram votes in later, that’s stealing the election, and that’s the opposite of what the president’s doing.”

Dillon made the comments during a briefing on the phone with reporters on Tuesday, according to Daily Caller. Video Below

“Biden campaign manager Jen O’Malley Dillon: ‘We continue to have multiple pathways to 270 electoral votes’ says they can win 270 even without PA and FL,” tweeted Time reporter Charlotte Alter.

Joe Biden campaign is saying they can win without PA (bad sign)… on the ground, Dems claim they have record turnout in PA (good sign).

The conflicting messaging is confusing. Which is it? pic.twitter.com/GCkJGC6AMG