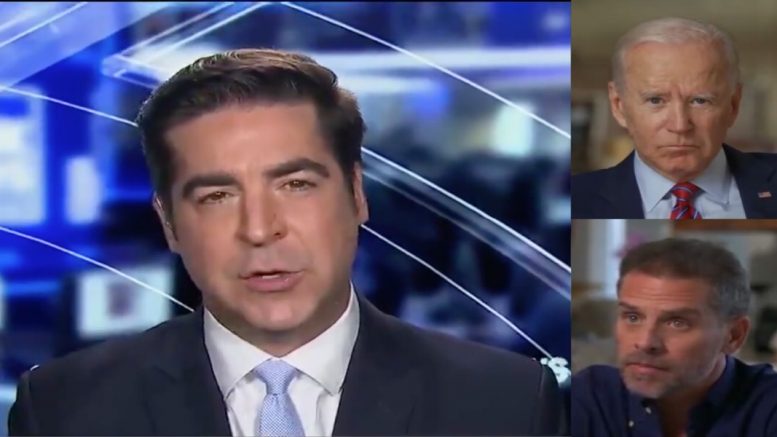 Wednesday during Fox News’ “The Five”, co-host Jesse Watters summarized Tucker Carlson’s explosive Tuesday interview with Tony Bobulinski, a former business associate of Hunter Biden and a retired lieutenant in the U.S. Navy. Bobulinski said during the interview, that he had raised concerns in 2017 to the former vice president’s brother Jim Biden, about Joe Biden’s alleged ties to a possible joint venture with a Chinese energy firm.

“I’d like Peter Doocy to ask Joe Biden this question for the next week, we’ll see if they can do this. Excuse me Juan, let me just give Peter some advice. Ask the vice president, ‘Hey, Mr. vice president, you ever met Tony?’ Let’s see if he can answer that question, [be]cause that would settle a lot of things,” Watters said, recommending Fox News’ Peter Doocy, a general assignment reporter, who has been covering some of Joe Biden’s campaign.

“You bring up credibility,” Jesse Watters pointed out, appearing to be talking to Juan Williams. “Let’s bring it up.”

“Who do you believe? Do you believe the Naval Officer who held a high security clearance and commanded a nuclear submarine– that has emails and documentation and voice recordings, who went to the FBI under penalty of perjury and said his story? Or do you believe the political family with a history of plagiarism and shady deal making, whose hidden and ran for the hills since this broke, and three of their business partners are in prison,” Watters continued.

“It’s very simple; they cooked it up in 2015 while Joe was VP. The Chinese communists send 10 million dollars to the Biden family. 5 million of it was an interest free loan, the other 5 million went to the holding company where Jim Biden, the bro, held back 10 for the ‘Big Guy'”, the Fox News co-host said.

“So then, Tony meets with the VP twice on this. And then when Tony wants to put good corporate governance, Joe Biden says no. They cut Tony out of the deal, and then they smear him as a Russian agent when he goes to the FBI,” Watters explained, referring to comments made by Rep. Adam Schiff (D-CA), 50 former intelligence officials, and Joe Biden himself during the final debate.

Watters went on to say, “But the best part of the story is this: The communist Chinese guy, who they were doing the deal with, he was under FBI surveillance, because he was a spy. And then when he gets popped by the SDNY for bribery, Hunter Biden represents him for a million dollar fee. And now, he’s serving three years in jail.”

“So the Biden family was doing business with Chinese communist spies who were under FBI surveillance. Boom! How’s that for a boom?” Watters asked. Video Below

Patrick Ho Chi Ping was charged on Dec. 18, 2017 with conspiracy to violate the Foreign Corrupt Practices Act (FCPA) and money laundering related to CEFC China Energy contracts in Uganda and Chad. Ho had been an executive at the multi-billion dollar Chinese energy company CEFC before his arrest. Ho was convicted in March 2019 and sentenced to three years in prison, per Daily Caller.

The Biden family was doing business with Chinese Communist spies who were under FBI surveillance. #TheFive pic.twitter.com/LZae7f01pT

Meanwhile, on Wednesday, Tucker Carlson told his audience he was sent documents regarding Hunter Biden, but the documents “suddenly vanish”:

(Related: Trump Steps Off The Airplane & Rips Journalist Over Hunter’s Alleged Laptop: “You’re A Criminal For Not Reporting It”)