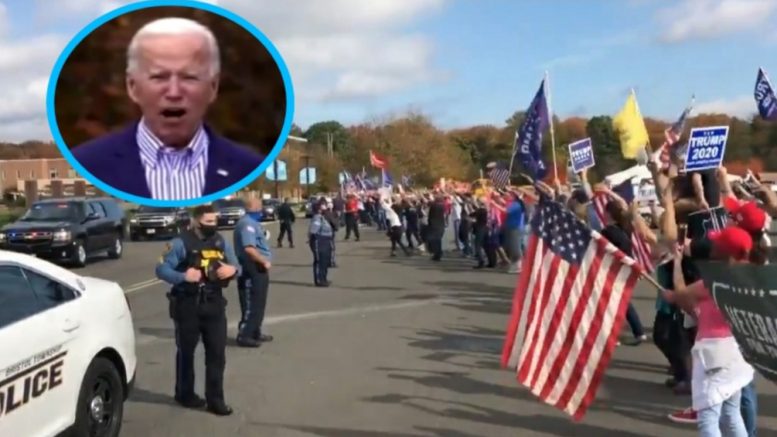 Trump supporters in Bristol, Pennsylvania got the last laugh on Saturday after being called “chumps” by former Vice President Joe Biden.

While delivering remarks in Pennsylvania, Democratic presidential candidate Joe Biden vented his irritation at Trump supporters who were disrupting his rally in the background with horn noises and yelling while waving their flags.

“I’ll work as hard for those who don’t support me as those who do, including those chumps with the microphone out there,” Biden said, then immediately coughed into his hand.

At PA rally, Biden says his job is to "heal" and work for everyone, including "chumps." https://t.co/z0Eh053JZq pic.twitter.com/KU9saAXuTL

Prior to the former VP’s moment of frustration, Trump supporters gathered outside Biden’s event and turned it into a giant MAGA flag rally and car parade.

Only one Biden sign could be seen among a plethora of Trump flags in a video that was uploaded to social media.

Incredible. The one public appearance Joe Biden does this weekend is a speech in Pennsylvania that immediately turns into a massive Trump rally/car parade/GOTV event. pic.twitter.com/g2DwkxlYWt

Following his speech, Biden’s motorcade was forced to drive right through the sea of Trump supporters, who he called “chumps” just moments earlier.

The Trump supporters seized the opportunity to let Biden know how they feel about him, as they booed and blew their horns while he was driven past.

Joe Biden leaving his only public event of the weekend, forced to drive through a Trump rally that drowned out and shut down the speech after he called Trump voters “chumps.” Priceless. pic.twitter.com/PYRu6vtL9L

Sen. Graham: “We’ve Got The Votes To Confirm Justice Ginsburg’s Replacement Before The Election”