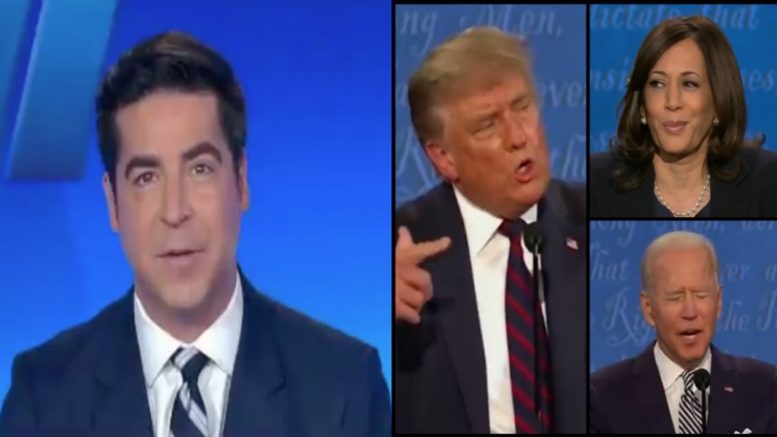 Before the final debate is set to kick off in Nashville, Tennessee between President Donald Trump and Democratic presidential nominee Joe Biden on Thursday evening, Fox News’ Jesse Watters weighed in on “The Five”, suggesting that the Commander in Chief “should be debating Kamala Harris tonight because after what broke today there’s no way Joe Biden can be President.”

Watters clarified, saying, “We now have confirmation the emails are legit”, referring to a report, in which a former business partner of the Biden family has confirmed the authenticity of an email from Hunter Biden’s laptop discussing a lucrative business deal with a Chinese energy company.

The businessman, Tony Bobulinski, said that Joe Biden himself is the person referred to as “the big guy” in the May 13, 2017 email, which discusses payments made to various partners in a business deal with China Energy (CEFC).

In a statement, Bobulinski said that he “grew concerned” while working with Hunter Biden that the Biden family had “aggressively leveraged the Biden family name” to make money with foreign companies, including in China.

“They are not any form of domestic or foreign disinformation,” Bobulinski said. “Any suggestion to the contrary is false and offensive. … Hunter Biden called his dad ‘the Big Guy’ or ‘my Chairman,’ and frequently referenced asking him for his sign-off or advice on various potential deals that we were discussing.”

Jesse Watters said during the segment, “The business partner is out there talking, and what did [Bobulinski] say? Joe Biden is the ‘big guy’. And Joe Biden’s getting kick backs from the Chinese, that Joe Biden was selling his office, his family was selling access, and he was getting rich from it. His whole family was getting rich. And so, maybe that’s why Joe was so soft on China his whole career. Maybe that’s why Joe covered for the Chinese when the virus hit and blamed President Trump instead.” Continued Below

“This Biden scandal is gonna break wide open tonight live in front of 70 million American people watching,” Watters predicted. “I don’t know what Joe says. I don’t know what he can say, but this is an October surprise. I don’t think Joe is surprised. Many people knew that the Biden family was a ticking time bomb. And it exploded two weeks before an election.”

He asked, “What did Barack Obama say? ‘He wouldn’t put it past Joe to blanket up.’ Well this is what happened; he blanket[ed] up. Donald Trump wasn’t surprised by it. He knew they were corrupt last year, and he got impeached for pointing it out.”

Watters also pointed out Hunter Biden’s ex-business partner Tony Bobulinski, the former CEO of SinoHawk Holdings, a joint venture between members of the Biden family and now-defunct Chinese oil company CEFC, was warned “Don’t mention Joe being involved, it’s only when u [sic] are face to face, I know u [sic] know that but they are paranoid,” a screenshot of the message shared by Fox News’ chief congressional correspondent Mike Emanuel reads. Video Below

“I think everybody owes the New York Post an apology. Joe Biden was using his office as a cash register. This guy has verified emails. These aren’t even most of them from Hunter’s laptop. They have Joe now setting up meetings, participating in meetings, scouting potential clients,” Watters said.

He added: “They have photos of Joe at the Beverly Hilton in Los Angeles on the same day Hunter is talking about setting up a meeting to discuss the China deal, where Joe got a 10% kickback. So this story is beginning, there’s more out there. … If the media reports it, they destroy their candidate, but if they hide it, then they destroy their credibility. So they have no where to go here.”

Donald Trump should be debating Kamala Harris tonight because after what broke today there’s no way Joe Biden can be President. #TheFive pic.twitter.com/kiNZOYI6nL

Joe Biden was using his office as a cash register. #TheFive pic.twitter.com/s13UHA5MHO

“Mrng plse let me knw if we will do early dinner w your Uncle & dad and where, also for document translation do you want it simple Chinese or traditional?” Bobulinski texted to Hunter Biden on May 2, 2017.

“Not sure on dinner yet and whatever is the most common for a Chinese legal DOC,” Hunter replied.

“Chinese legal docs can be both, i’ll make it traditional,” Bobulinski answered. Later on, Hunter replied, “Dad not in now until 11- let’s me I and Jim meet at 10 at Beverly Hilton where he’s staying.” “Jim” is James Biden, Hunter’s uncle and the former vice president’s brother.

On the same day, Bobulinski sent a text to James Biden. “Great to meet u and spend some time together, please thank Joe for his time, was great to talk thx Tony b,” the message states.

President Trump is expected to bring former Hunter Biden associate Tony Bobulinski as his guest to the final presidential debate Thursday night. He will deliver a statement to the media before the debate, and planned to say that he is turning his electronic devices over to the FBI.