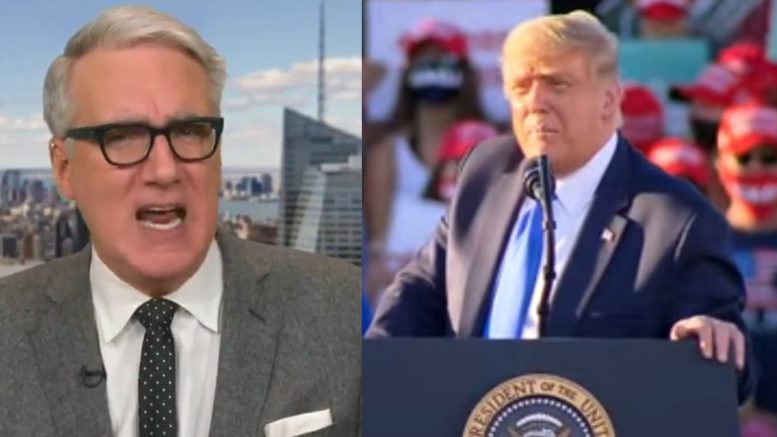 Leftwing political pundit Keith Olbermann is now calling for President Donald Trump to face the death penalty over his handling of the coronavirus pandemic and for “attacking the only hope we have: the science.”

The latest bizarre suggestion made by the former ESPN sports commentator comes just days after he called for President Trump and his “enablers and supporters” to be “prosecuted and convicted and removed from our society.”

In a video posted to his YouTube channel, a clearly disturbed Olbermann looks into the camera and says that he is “tired of the needless sickness and the needless terror because this mentally incompetent, inhuman dumb bastard has lied about this disease in a thousand different ways.”

“I am tired of the thought that we are now going to repeat the months of March and April in this country,” he continued. “A country that should have learned something, but which in large part, has been authorized to wallow and die in its own stupidity because of one man, one dumb bastard, one selfish son of a bitch, one real-life major French attacking the only hope we have: the science.”

Olbermann then declared that President Trump should “be on trial” and face the “death penalty” over the “murders” caused by the coronavirus.

“Donald Trump should be on trial for the 220,000 murders — death penalty for each count,” he concluded. Video Below

Keith Olbermann calls for Trump to get the death penalty, one for every COVID death. Unhinged. pic.twitter.com/8JbY0pPu7p

Paul Joseph Watson took note of the wild rant and recalled how much Olbermann has changed over the years regarding politics.

Keith Olbermann was a respected voice in the mid to late 2000s, railing against interventionist wars.

Now he’s just a demented, angry lunatic, blaming Trump for a pandemic that originated in China.