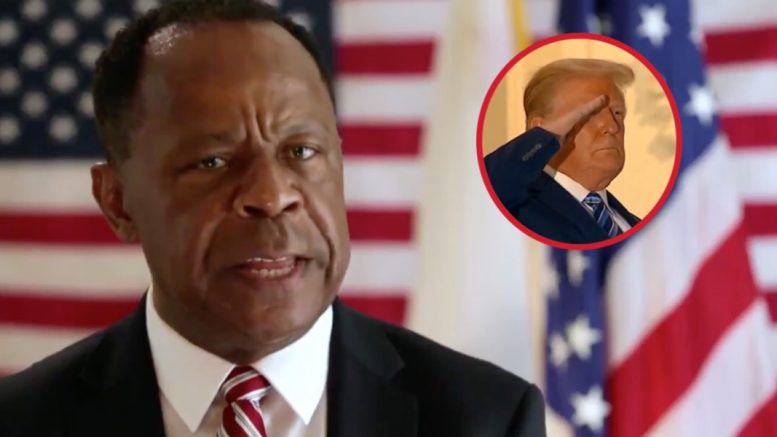 “This year I’m voting for a Republican for president. It’s the first time I’ve ever done this in my life,” Leo Terrell proudly admitted. “And I strongly encourage you to do the same, fair-minded friends.”

“This is why we should re-elect Donald Trump: President Trump is good for all Americans, but especially Black Americans,” he continued. “During his term in office, President Trump polices have brought record low unemployment for Black Americans. He funded historical Black colleges. He signed for the police reform bill, immediately following the George Floyd tragedy in Minnesota.”

Terrell said that President Trump’s opponent, Joe Biden, was the author of the 1994 Violent Crime Control and Law Enforcement Act, saying the bill was the “main reason for the mass incarceration in this country, in the 26 years since it was passed”.

“Joe Biden is also responsible for the drug bill that made a distinction between crack, pot, or cocaine. Guess who suffered more from that?” Terrell asked, referring to The Anti-Drug Abuse Act of 1986 (“the 1986 Act”), which initiated the disparate treatment between crack and powder cocaine.

At that time, crack cocaine was believed to be more problematic and dangerous than powder. Based on these mistaken beliefs, the 1986 Act authorized a 100-to-1 ratio sentencing scheme, which equated a single gram of crack with 100 grams of powder. No rationale for the ratio was discussed in the legislative history, reported the United States Sentencing Commission. Video Below

Hello fair minded friends – 15 days until #Election2020. Here are my closing arguments on why you NEED to vote for @realDonaldTrump 1/3 #Trump2020 pic.twitter.com/4XWID99RAn

Terrell said “his second reason to vote for President Trump” is “school choice”, saying, “Prior to the pandemic, the economy of the United States was at record levels. And not just for the usual suspects, the economy held the lowest employment for Black Americans”.

The Civil Rights attorney said the lowest employment for Black Americas is an “amazing accomplishment” by President Trump and that it “barely got a mention outside of a cure in the pandemic”.

“What fixes an economy?” he asked. “Education, specifically school choice, a term Democrats run from every year, but equal opportunity is to breaking the poverty cycle. In the new Civil Rights issue that people of color face, we need to stand up to school unions for the sake of students that are not wealthy.”

“A good education will give you every opportunity in the world and all the promises of this country. School choice is the key to improving the economic opportunities of all Americans. President Trump supports choice, Joe Biden does not,” Terrell said.

“My fair-minded friends, the final reason we need to re-elect President Trump is for law and order,” Mr. Terrell said.

“As a Civil Rights attorney, I do not have any patience for bad cops. Get them out. But the Democratic Party has been hijacked by extremists; Antifa looting, Black Lives Matter rioting. If those in charge of Black Lives Matter truly believe, then they would know the police are the last line of defense against drugs and crime in our most vulnerable neighborhoods,” he explained.

Terrell said presidential democratic nominee Joe Biden and his fellow Democrats have “surrendered this to nonsense”, adding that it “will only hurt Americans, not help us”.

“Fair-minded friends, the only logical choice for president is simple. We’re in a difficult time right now, we need a fighter. We need a president who will ignore politics as normal and get us back on track. We need to re-elect President Donald Trump”, Terrell added.

Fair minded friends – here is my 3rd and final reason why you MUST vote and tell friends, to vote and re-elect @realDonaldTrump #Election2020 3/3 #closingargument pic.twitter.com/6gpvVACeBH

Trump on 2020 Election: ‘Massive Evidence in Swing States, Available Upon Request (With Much More to Come)’