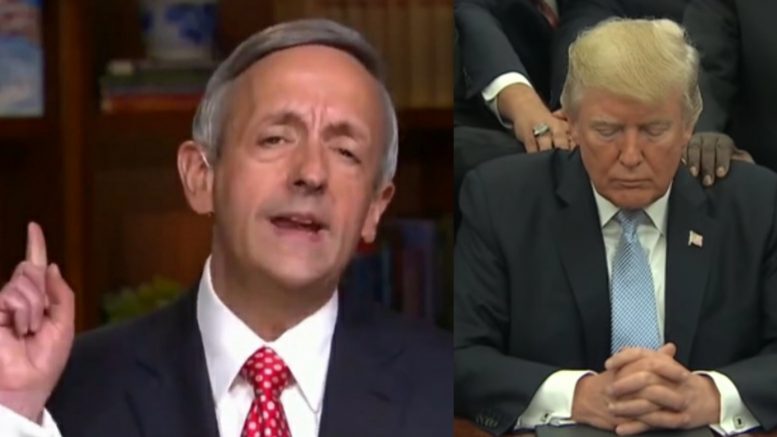 Pastor Robert Jeffress pointed out “the war ” that is currently going on between good and evil in wake of the 2020 election, and he urged Christians to “go out and vote on November 3rd” to help defeat the wicked attack on President Donald Trump, who he claimed is on “the right side of God.”

Jeffress made the remarks while weighing in on the government’s attempt to slow-walk documents authorized by President Trump to be declassified, which pertain to the Trump/Russia collusion investigation and Hillary’s email scandal.

Pastor Jeffress went on to give “two ways” in which Americans can “beat this attack” on President Trump.

Related Article: Pastor Jeffress On Trump Holding Up Bible At St. John’s Church: “Every American Needs To Thank God Daily For A President Like Donald Trump”

“First of all, we need to pray,” Jeffress said. “I believe in the power of prayer, but we’ve got to do more than pray. We’ve got to go out and vote on November 3rd to break the backs of those who are opposed to our President.”

“We need to vote as if the survival of our nation depends upon it because it does,” he concluded. Video Below

Fighting for Good: @RobertJeffress says there is a war between good and evil in our country and we must vote for @realDonaldTrump who is on the right side of God. #AmericaFirst #MAGA #Dobbs pic.twitter.com/tUjeRM8Mso