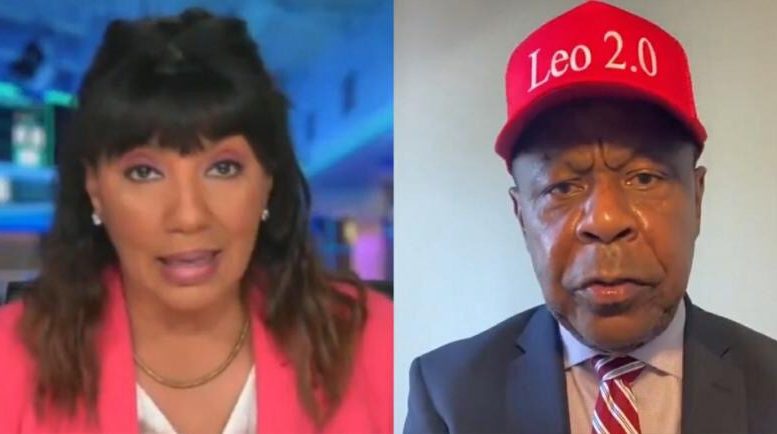 On Saturday, the Commander in Chief made his first public appearance at the White House since returning from Walter Reed National Military Medical Center earlier this week, delivering remarks at a “peaceful protest for law and order”. The event was organized by Candace Owens and Brandon Tatum, founders of the BLEXIT movement.

President Trump spoke to hundreds of supporters from the White House balcony paying tribute to law enforcement, saying in part, “We support you, we honor you, it’s a dangerous profession. They’ve been doing an incredible job and I just want to thank them on behalf of everyone here today because that’s why we’re safe.”

Following the president’s remarks to supporters from the White House balcony, Fox News’ weekend anchor, Arthel Neville, claimed that President Trump was “pandering to the Black and Latino Americans” who were in attendance at Saturday’s event.

“The president was pandering to the Black and [Latino] Americans garnering, or wishing to garner their support this election,” Neville said on air.

“And he also made sure to say he is pro jobs, pro workers, pro law and order. 500 people were in attendance we’re told, by reporters on the ground. They were wearing masks,” she added.

Civil Rights attorney, Leo Terrell, responded to Arthel Neville’s claim– in that the president was “pandering to the Black and Latino Americans” leveling the Fox News weekend anchor. Continued Below

“How dare you [Arthel Neville]– used the word ‘pandering’ to describe [Donald Trump’s] COMMITMENT to people of color,” Leo Terrell fired back on Twitter Saturday.

“Very Bias reporting! I suggest you hide your Democratic support for [Joe Biden] while broadcasting on Fox News,” Terrell recommended.

Attendees for the balcony speech were required to bring masks to the event, or were given one. They also had to fill out a health questionnaire and have their temperatures checked. They were encouraged to follow CDC guidelines, including wearing masks and keeping social distance, as reported by Fox News. Video Below

Fox News's @ArthelNeville: "The president was pandering to the Black and Latinx Americans… wishing to garner their support this election." pic.twitter.com/nR82NGsvoV

How dare you @ArthelNeville used the word "pandering" to describe @realDonaldTrump COMMITMENT to people of color. Very Bias reporting! I suggest you hide your Democratic support for @JoeBiden while broadcasting on @FoxNews https://t.co/LrAabpFIHy

Black and Latinos Americans do not support the Marxist, anti-police rhetoric that has become fashionable in the media.

Today, thousands of us have descended upon Washington D.C to #BackTheBlue.

Minorities do not belong to the Left. #BLEXIT @BLEXIT pic.twitter.com/vBVZANr7jQ