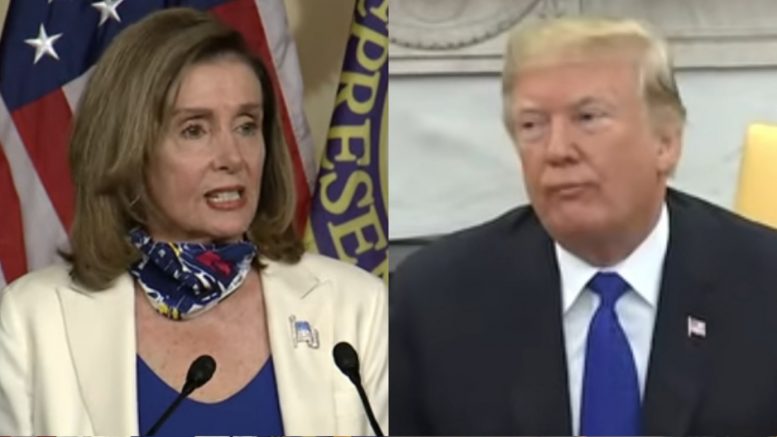 On Tuesday, President Donald Trump made the executive decision to end all COVID-19 relief negotiations until after the election in a move that left House Speaker Nancy Pelosi frustrated.

Related Article: Huckabee: If There’s One Thing On Which Americans Can Agree, It’s That Pelosi Should Keep Her Mouth Covered At All Times

“Nancy Pelosi is asking for $2.4 Trillion Dollars to bailout poorly run, high crime, Democrat States, money that is in no way related to COVID-19,” the President tweeted. “We made a very generous offer of $1.6 Trillion Dollars and, as usual, she is not negotiating in good faith. I am rejecting their request, and looking to the future of our Country.”

“I have instructed my representatives to stop negotiating until after the election when, immediately after I win, we will pass a major Stimulus Bill that focuses on hardworking Americans and Small Business,” he continued. “I have asked Mitch McConnell not to delay, but to instead focus full time on approving my outstanding nominee to the United States Supreme Court, Amy Coney Barrett.” Continued Below

“Our Economy is doing very well. The Stock Market is at record levels, JOBS and unemployment also coming back in record numbers. We are leading the World in Economic Recovery, and THE BEST IS YET TO COME!” Trump wrote.

“Crazy Nancy Pelosi and the Radical Left Democrats were just playing ‘games’ with the desperately needed Workers Stimulus Payments. They just wanted to take care of Democrat failed, high crime, Cities and States. They were never in it to help the workers, and they never will be!” he added.

Speaker Pelosi fired back after learning of Trump’s decision to hold off on stimulus negotiations, where she said that the President “showed his true colors” by “putting himself first,” and claimed that he is “unwilling to crush the virus.”

In a statement posted on her website, Speaker Pelosi wrote:

“Today, once again, President Trump showed his true colors: putting himself first at the expense of the country, with the full complicity of the GOP Members of Congress.

“Walking away from coronavirus talks demonstrates that President Trump is unwilling to crush the virus, as is required by the Heroes Act. He shows his contempt for science, his disdain for our heroes – in health care, first responders, sanitation, transportation, food workers, teachers, teachers, teachers and others – and he refuses to put money in workers’ pockets, unless his name is printed on the check.

“At the same time, the President is abandoning meeting the needs of our children as they adjust to learning in-person, virtual or hybrid. Instead, Trump is wedded to his $150 billion tax cut for the wealthiest people in America from the CARES Act, while he refuses to give real help to poor children, the unemployed and America’s hard working families.

“Clearly, the White House is in complete disarray. Sadly, they are rejecting the urgent warnings of Fed Chairman Powell today, that ‘Too little support would lead to a weak recovery, creating unnecessary hardship for households and businesses. Over time, household insolvencies and business bankruptcies would rise, harming the productive capacity of the economy and holding back wage growth. By contrast, the risks of overdoing it seem, for now, to be smaller. Even if policy actions ultimately prove to be greater than needed, they will not go to waste.’”

We leave you with a clip from his press conference