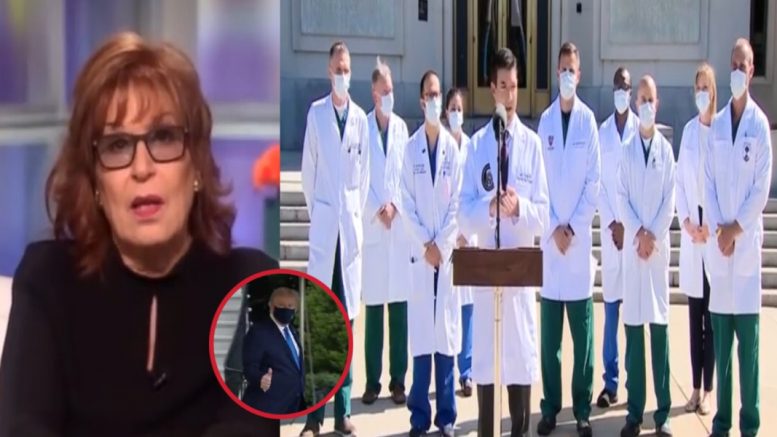 White House physician Dr. Sean Conley and other members of the medical team briefed reporters on President Donald Trump’s condition Saturday at Walter Reed Medical Center, saying the president is “doing very well” and has no difficulty breathing. President Trump was moved to the medical center on Friday “out of an abundance of caution” following mild symptoms of the coronavirus.

Trump, meanwhile, praised the staff at Walter Reed in a tweet Saturday, writing, “Doctors, Nurses and ALL at the GREAT Walter Reed Medical Center, and others from likewise incredible institutions who have joined them, are AMAZING!!! Tremendous progress has been made over the last 6 months in fighting this PLAGUE. With their help, I am feeling well!”

Why does Trump need all those doctors?

White House physician Dr. Sean Conley and other members of the medical team said they were “extremely happy with the progress” President Trump is making. “This morning, the president is doing very well,” Conley said.

Dr. Sean Dooley said that cardiac, kidney and liver functions are all normal, that President Trump is not on oxygen and is not having any difficulty breathing or walking. He quoted Trump as saying: “I feel like I could walk out of here today.”

Separately, Dr. Brian Garibaldi described Trump as being in “such great spirits.” The doctors also said Trump had been fever-free for 24 hours, and that symptoms of a nasal cough and fatigue had all “resolved.” Continued Below

In response to Joy Behar wondering “Why does President Trump need all of those doctors?”, users on Twitter instantly responded, blasting the ABC daytime talk show host.

Why don’t you tell us Joy how many is too many?? Give us a round number

Now don’t take all day, we gotta let him know so he make the adjustments…

You do want him to get well, Right?

Because he’s the President of the United States.

You are seriously one of the most vile hateful creatures on this planet. How miserable it must be to harbor that much hate and disdain for someone. I pray for your soul, may you find peace……

He’s the president and you’re NOT!

Because he’s your President and he is very important❤️🇺🇸

Well, Joy now that you mention it, I hope they fly in every expert Dr. from every corner of the USA to support Mr. President during his recovery!

That’s President Trump to you.

I know this is difficult for you to accept, but he is The President of the United States. No matter how much you hate it and wish it weren’t true. Our Presidents were and will be treated with the very best of care.

The better question would be why do You need so many Plastic Surgeon’s.

What is wrong with you. Take a vacation or something.