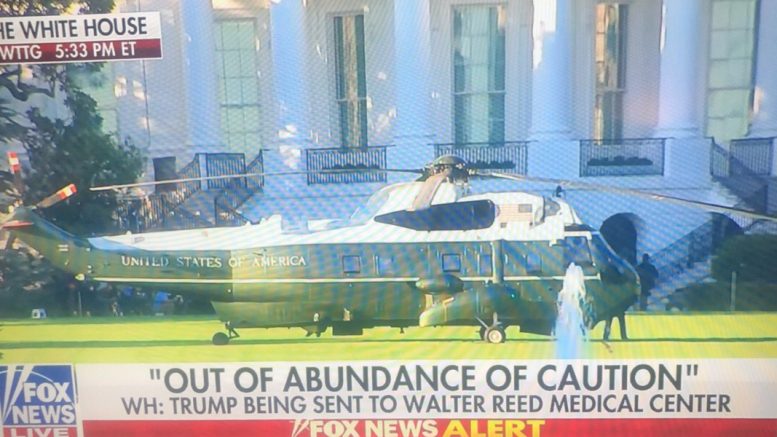 White House chief of staff Mark Meadows told reporters at the White House Friday that President Trump is experiencing “mild symptoms” of COVID-19 after the Commander in Chief and First Lady Melania Trump tested positive for the novel coronavirus.

“As all of you know the president and the first lady tested positive for COVID-19,” Meadows said. “They remain in good spirits.”

“Following PCR-confirmation of the President’s diagnosis, as a precautionary measure he received a single 8 gram dose of Regeneron’s polyclonal antibodies, the President has been taking zinc, vitamin D, famotidine, melatonin and a daily aspirin,” the president’s physician wrote.

“As of this afternoon, the President remains fatigued but in good spirits. He’s being evaluated by a team of experts, and together we’ll be making recommendations to the President and First Lady in regards to the next best steps,” he said.

Conley added: “First Lady Melania Trump remains well with only a mild cough and headache, and the remainder of the First Family are well and tested negative for SARS-CoV-2 today.” Continued Below

*Update* The Commander in Chief is being sent by Marine One to Walter Reed National Military Medical Center for tests and evaluation as a precautionary measure. He is likely going to stay in Walter Reed hospital for several days, per physician guidance.

.@realDonaldTrump is expected to depart the @WhiteHouse soon to travel to @WalterReedArmy Medical Center for tests and evaluation.

WH: Out of an abundance of caution, and at the recommendation of his physician and medical experts, the President will be working from the presidential offices at Walter Reed for the next few days. President Trump appreciates the outpouring of support for both he & the First Lady

The President will be working from Walter Reed for the next few days pic.twitter.com/wCwUGG2gOe