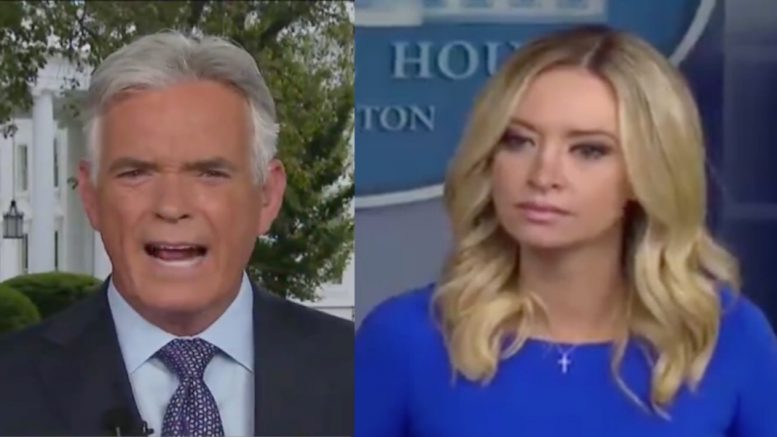 During Thursday’s White House press briefing, press secretary Kayleigh McEnany pushed back at Fox News’ John Roberts and CBS News’ Paula Reid as they pressed her over whether the Commander in Chief condemns “White supremacy”.

McEnany proceed to read quotes from President Trump condemning racism and hate groups in all forms. “I have an entire list of these quotes that I can go through with you. He has condemned White supremacy more than any president in modern history,” she told Roberts. “… It’s shameful that the media refuses to cover it.”

Following the White House press briefing, Fox News’ John Roberts vented his frustration on air Thursday for “hammering” him over asking McEnany for a “definitive and declarative statement” that the president denounces white supremacy and hate groups.

“And for all of you on Twitter who are hammering me for asking that question, I don’t care,” he said. “Because it’s a question that needs to be asked, and clearly the president’s Republican colleagues a mile away from here are looking for an answer for it too. So stop deflecting. Stop blaming the media. I’m tired of it.”

When Fox News host and moderator Chris Wallace asked Trump if he was willing to condemn white supremacy and militia groups, Trump said “sure” but insisted “left-wing” groups were to blame for most violence. When Democratic nominee Joe Biden asked Trump to condemn the Proud Boys, Trump told them to “stand back and stand by,” The Hill reported.

“I’ll tell you what, somebody has got to do something about Antifa and the left,” Trump added.

Trump attempted to clarify his remarks on Thursday by saying he didn’t know who the Proud Boys are and that they should “stand down.” He later added that he has “always denounced any form” of white supremacy, per The Hill. Video Below

Press Secretary Kayleigh McEnany fired back at Roberts, telling him to refer to his “wife’s reporting”: