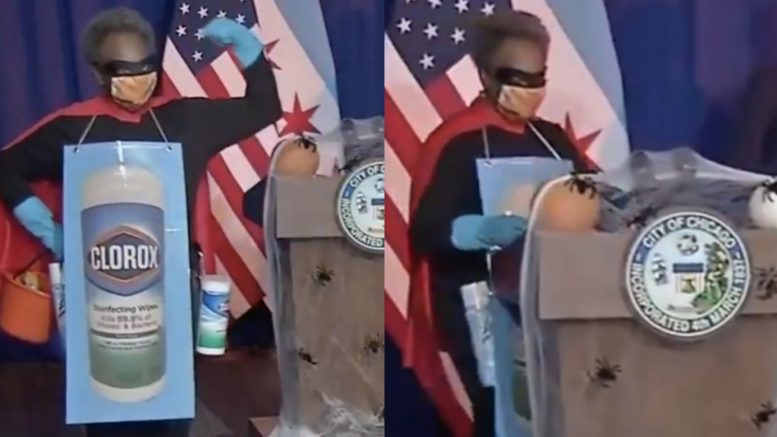 Chicago’s mayor Lori Lightfoot made quite the unique entrance at her press conference on Thursday before announcing the city’s COVID-19 restrictions for Halloween.

Joined by public health Commissioner Dr. Allison Arwady, Mayor Lightfoot appeared in front of cameras wearing a black and red superhero costume with a “Clorox” sign on the front, a cape that had “Rona Destroyer” imprinted on it and an orange face mask.

Related Article: McEnany Fires Back At Chicago Mayor Lightfoot For Calling Her A ‘Karen’: “America Is Outraged By The Violence”

Dr. Allison had a similar black and blue outfit on with a “Germex” sign on the front.

The pair of leaders stood firmly while flexing one of their arms and holding trick or treat containers against their hips as music played for the full effect before walking up to the podium.

During the press conference, Lightfoot said she will allow people to celebrate safely, including a requirement that everyone wear masks.

The announced guidlines also require people handing out candy to “leave a light on or hang a sign in their window letting others know whether they’re participating in the holiday while following social distancing rules and providing hand sanitizer,” according to Chicago Tribune.

Trick-or-treaters will be required to walk in groups of six people or fewer and are must avoid sticking their hand into candy bowls, while house parties and haunted houses will be prohibited, as per the Tribune’s report.