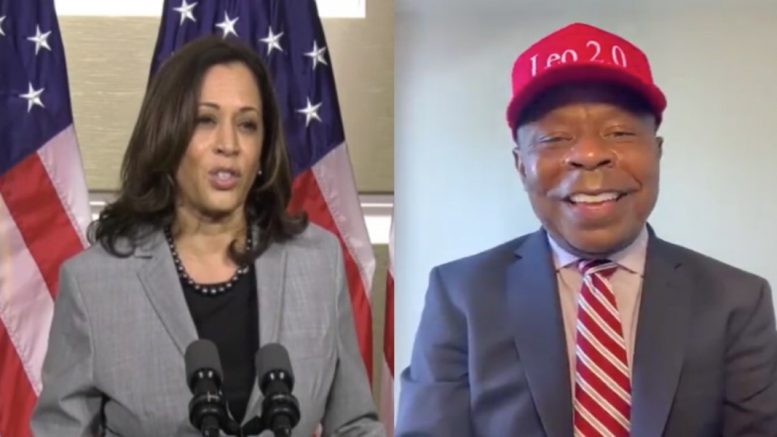 “She was part of our culture,” Senator Kamala Harris said, referring to the late Justice Ruth Bader Ginsburg.

“Yes, we wear those Notorious BIG t-shirts with a lot of pride,” Harris misstated, instead of saying “Notorious RBG”.

“Whenever @SenKamalaHarris, speaks you can tell she is a phony,” Terrell declared. “She still has not visited the ambushed officers who were shot in California. Vote #Trump”. Video Below

Whenever @SenKamalaHarris, speaks you can tell she is a phony. She still has not visited the ambushed officers who were shot in California. Vote #Trump https://t.co/bJQPRKvJu3

It is also worth noting that Senator Kamala Harris last week, named Tupac Shakur as the “best rapper alive” before quickly correcting herself and declining to name another rapper, during an interview with CNN commentator Angela Rye at the NAACP’s virtual convention.

Shakur, who was killed in 1996, has been the subject of numerous conspiracy theories pushed by fans who think that the rapper either faked his own death or has been in hiding for the past 24 years, as reported by Washington Examiner.

Then says “Not alive, I know, I keep doing that.”

Tries to think of another living rapper. “There’s some I would not mention right now because they should stay in their lane.” pic.twitter.com/MZJ5FZC4qP

In a February 2019 interview on the Breakfast Club morning radio show, Harris admitted to smoking marijuana and said that she listened to Tupac and Snoop Dog during her college years at Howard University in Washington, which she was accused of lying as the West Coast rappers weren’t putting out music until years after she graduated.

Harris graduated from Howard University in 1986 and was finished with law school by 1989. She was admitted to the State Bar of California in 1990.

As for Tupac, his first album “2Pacalypse Now” was released in 1991. The rap legend also recorded music as part of the group Digital Underground, but it was also released in the early 1990s after Harris finished school.

WATCH: Kamala Harris admitted, on a radio interview with The Breakfast Club, to have smoked pot in college; suggesting she did so while listening to Tupac and Snoop.