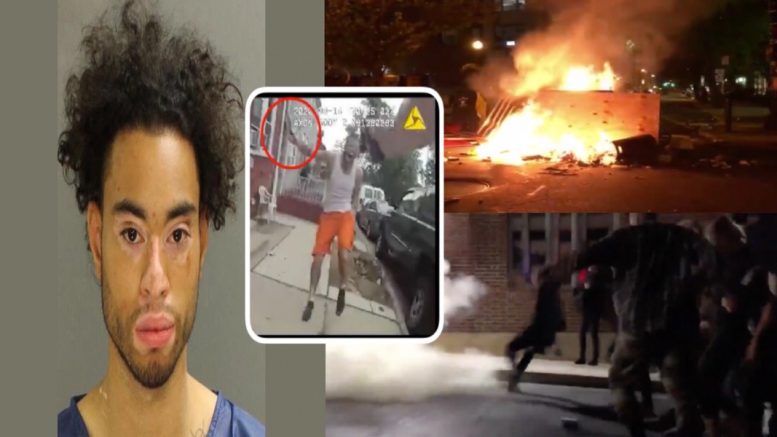 Sunday in Lancaster, Pennsylvania, protesters took to the streets after police fatally shot a man who authorities said was captured on bodycam video “brandishing a knife over his head” in a threatening manner. Lancaster city police responded to a home in the 300 block of Laurel Street about 4:15 p.m. for a reported domestic disturbance call.

Lancaster District Attorney’s Office released a statement on Sunday night that said the 27-year-old who was shot dead, Ricardo Munoz, was armed with a knife and pronounced dead at the scene Sunday evening. Munoz, reportedly had a history of stabbing four people including a teenager.

The police body cam showed Ricardo Munoz emerge from a house and brandish a large knife in a threatening manner. Munoz was brought down by what appeared as defensive gunfire by the police officer.

This is the bodycam footage of the officer-involved shooting in Lancaster, PA that Black Lives Matter is rioting over. The perpetrator charged at the police officer with a knife over his head with clear intent to strike. pic.twitter.com/xD72TweQK4

Fox News reported, hundreds of protesters took to the streets of Lancaster following the shooting. The crowd formed outside the police station, where the department stated multiple buildings and government vehicles were damaged by demonstrators. Videos emerged from the scene showing protesters apparently slamming on the building’s front door.

The acts committed overnight were not peaceful acts of protest; the behavior was violent and riotous. Numerous buildings and vehicles were damaged, fires were set – all without regard for the owners and individuals who could have been physically harmed by the riotous actions, according to Lancaster District Attorney’s Office. Video Below

Officers made a total of (8) arrests related to the arson/riot outside of the Police station. The arrests were made at approximately 0300 hrs. and shortly thereafter. All suspects arrested were transported to the Lancaster Bureau of Police station for processing and to be held for arraignment. (4) of the (8) suspects are from outside of Lancaster County. (2) of the suspects were armed with handguns during the protest and riot. Those handguns were recovered by Officers after the arrests, according to the Lancaster DA office.

Ricardo Munoz, the man who died in the officer-involved shooting in Lancaster today that Black Lives Matter is rioting over, has a history of stabbing people. In 2019, he stabbed four people, including a teenager. pic.twitter.com/8SA9UwtPqy

BLM rioter in Lancaster, Pa. is hit in the groin with an impact munition by police. He falls down and screams. Video by @livesmattershow: pic.twitter.com/2SDbyQMbpw

Tonight in Lancaster, protesters are calling out police to a skirmish pic.twitter.com/j6WuJ8xZzu

BREAKING: Antifa has begun breaking the windows of the Lancaster police precinct

Officers are responding with non lethal rounds and are now in the streets pic.twitter.com/icg1rDxxC9

BREAKING: arsonists are lighting fires in the streets in Lancaster and adding public trash bags as fuel at the BLM ✊🏿 riot pic.twitter.com/5Of9r9fGua

Black lives matter protesters join in and call to light the car on fire pic.twitter.com/3tdCL5zaYi

PENNSYLVANIA: After protesters were warned to get off the police station ramp and declared an unlawful assembly

Police then open up the first round of tear gas

Protesters then begin to continue to throw projectiles at police pic.twitter.com/1FvcT2D3sm

Many rioters can be seen yelping in displeasure pic.twitter.com/2wEU0s6xkX

BREAKING: police make a full offensive in Lancaster, Pennsylvania to clear out BLM and Antifa rioters

After they destroyed city property, including a police vehicle, created barricades, and threw rocks/bricks at officers

The unlawful assembly was declared hour ago pic.twitter.com/pg8K5wG9qd