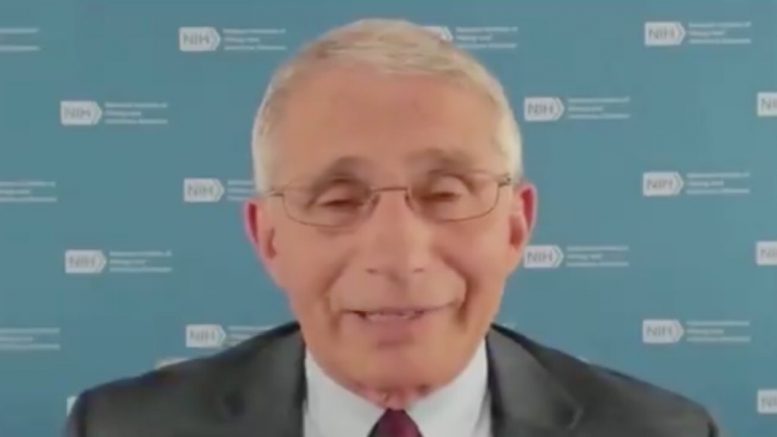 Wednesday during Fox News‘ “The Daily Briefing” Dr. Anthony Fauci, director of the National Institute of Allergy and Infectious Diseases and a White House coronavirus task force member, struck down the allegation that President Donald Trump downplayed COVID-19 in the early stages of the global pandemic.

Earlier Wednesday, The Washington Post published audio from an interview of President Trump conducted by veteran journalist Bob Woodward in March, during which Trump admitted he “wanted to always play it [the pandemic] down. I still like playing it down, because I don’t want to create a panic”, Fox News reported.

Fox News’ John Roberts asked Dr. Fauci if he thought President Trump had played down the threat of the virus.

“I didn’t get any sense that he was distorting anything. I mean in my discussions with him, they were always straightforward about the concerns that we had. We related that to him. And when he would go out, I’d hear him discussing the same sort of things,” Dr. Fauci said.

“[Trump] would often say, ‘We just got through with a briefing with the group from the task force,’ and would talk about it. So it may have happened, but I have not seen that kind of distortion,” he added. Video Below

Dr. Fauci says that he never got the sense that President Trump was downplaying COVID-19:

"I didn't get any sense that he was distorting anything. In my discussions with him, they were always straightforward about the concerns that we had." pic.twitter.com/2zQ4tMZY2I

According to the Washington Post, Bob Woodward alleged in his book that Dr. Fauci has described President Trump as being “on a separate channel” and offering “rudderless” leadership. Woodward also claimed Fauci said President Trump’s “attention span is like a minus number” and “his sole purpose is to get reelected.”

“If you notice, it was others have said that. So, you know, you should ask others. I don’t recall that at all,” Dr. Fauci pointed out. “So I mean, in the book, I didn’t read the book, but according to what I saw in the newspapers, it says ‘and others have said that.’ So you know, I don’t really want to get involved in the kind of stuff that is very distracting to the kind of things that I’m trying to do and that we’re all trying to do with this outbreak.”

Dr. Fauci disputes alleged quotes from him in Bob Woodward’s story that President Trump is “unfocused in meetings” and that “his sole purpose is to get re-elected.”

“I don’t recall that at all.” pic.twitter.com/BWG9YgfjXT

President Trump said on Wednesday: “I don’t want people to be frightened, I don’t want to create panic… I’m not going to drive this country or the world into a frenzy.”

“I’m a cheerleader for this country, I love our country. And I don’t want people to be frightened, I don’t want to create panic…I’m not going to drive this country or the world into a frenzy. We want to show confidence." pic.twitter.com/YqOsInbrO8

Meanwhile, White House Press Secretary Kayleigh McEnany defended President Trump on Wednesday, arguing that the president acted like “good leaders” do by staying “calm” in the midst of a crisis. She added that the president “has never lied to the American public on COVID.”

"Can you read the rest of the quote? Oh, you excluded the last part …"@PressSec @kayleighmcenany exposes nasty reporter for using only PART of a quote from President Trump: pic.twitter.com/fFVoRsIkHG

(Related: Dr. Fauci Confirms To Al Sharpton That China Gave The U.S. ‘Misinformation’ On The Coronavirus)