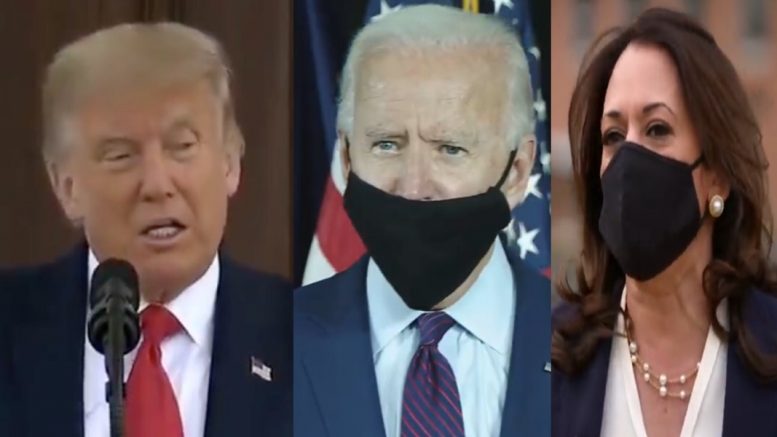 Monday during a Labor Day news conference at the White House, President Donald Trump called out Democratic presidential nominee Joe Biden and his running mate Senator Kamala Harris (D-CA) for their “reckless” and “dangerous” anti-vaccine rhetoric regarding the safety and effectiveness of a potential coronavirus vaccine being made through Operation Warp Speed.

“[They] should immediately apologize for the reckless anti-vaccine rhetoric that they are talking right now– talking about endangering lives,” the Commander in Chief said.

President Trump said that Biden and Harris’ comments “undermine[s] science”, adding, “What’s happening is all of a sudden you’ll have this incredible vaccine, and because you have that fake rhetoric– it’s political rhetoric– that’s all it is, just for politics.”

“Now they see we’ve done an incredible job and in speed like nobodies ever seen before. This could have taken two or three years, and instead, it’s going to be gonna be done in a very short period of time. [We] could even have it in the month of October. So contrary to all of the lies, the vaccine that they’re politicizing it– they’ll say anything. And it’s so dangerous for our country what they’ve said,” Trump expressed.

Multiple public health experts, including Dr. Anthony Fauci, have been saying for months that Operation Warp Speed is free from political interference and that they would take the vaccine as soon as it is ready, according to a Sunday press release from the Trump campaign. Video Below

President Trump calls out @KamalaHarris for her dangerous Anti-Vaccine rhetoric about the safety and effectiveness of a potential Coronavirus Vaccine pic.twitter.com/W7A2eSxnxd

Despite what Dr. Fauci and other public health experts say about the coronavirus vaccine, Biden and Harris are spreading fear and conspiracy theories because they care more about politics than saving lives. pic.twitter.com/NZKUkqeNdM

During a Saturday interview on CNN’s “State of the Union”, host Dana Bash asked Kamala Harris if she would take the vaccine once it’s approved, but Harris claimed to “not trust Donald Trump”.

“Well, I think that’s going to be an issue for all of us. I will say that I would not trust Donald Trump,” Harris said. “I will not take his word for it.”

BASH: "Let’s just say there’s a vaccine that is approved and even distributed before the election. Would you get it?"

HARRIS: "Well, I think that’s going to be an issue for all of us. I will say that I would not trust Donald Trump… I will not take his word for it." #CNNSOTU pic.twitter.com/jhxtdvaMF1