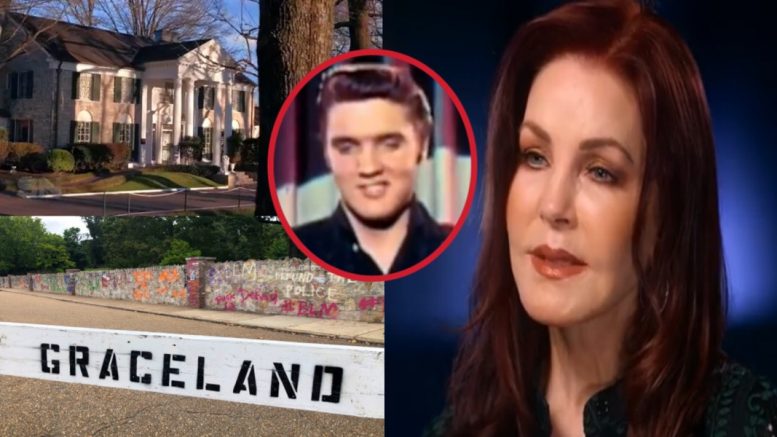 Historic Graceland in Memphis, Tennessee, where the “King of Rock and Roll”, Elvis Presley’s estate is located, was vandalized with graffiti last Sunday, with vulgar phrases such as “BLM”, “abolish ICE”, “f**k Trump”, and “defund the police,” The Freedom Times previously reported.

The graffiti covered up many of the hundreds of tributes left to Elvis Presley from visitors from around the world, which were handwritten by fans on the wall outside of the Mansion at Graceland, over the years.

Memphis reporter for WMC Action News 5 tweeted out photographs of the damaged walls on Monday morning:

Priscilla Presley, Elvis’ ex-wife, released a statement on Twitter on Thursday, concerning the graffiti at Graceland, saying she is “horrified” and “appalled”.

“Concerning the graffiti at Graceland, I’m absolutely horrified that those in our own city disgraced the walls surrounding Graceland. I’m saddened by acts like this and appalled by this behavior,” Presley wrote.

“We were able to clean all the graffiti off thanks to our dedicated crew,” she reported. Continued Below

Concerning the graffiti at Graceland, I’m absolutely horrified that those in our own city disgraced the walls surrounding Graceland. I’m saddened by acts like this and appalled by this behavior. We were able to clean all the graffiti off thanks to our dedicated crew.

Priscilla Presley is the person largely responsible for turning Graceland — which Elvis Presley bought in 1957 and lived at until his death, at the age of 42, in 1977 — into the designated historic site and tourist destination it is today. When she was faced with needing to sell the estate due to upkeep costs, Presley worked to open the property to the public, which paid off in spades, Taste of Country reported.

Crews are cleaning up after someone spray painted the walls of Graceland with messages like “Defund MPD” “Arrest Breonna Taylor’s murderers” and “BLM” and more. I’ll give you a live look on @FOX13Memphis midday. pic.twitter.com/iggrafPLb8

Another historic Memphis landmark, the Levitt Shell stage, where Elvis Presley gave his first paid concert on July 30, 1954, an open-air amphitheater in Overton Park in Midtown- Memphis, was also defaced with similar messages in graffiti. Bill Stanley, Elvis’ stepbrother, says he’s appalled that someone would deface Elvis’ home. “This is totally uncalled for,” said Stanley. “One of the saddest days of my life. I mean, besides the day that Elvis passed away, this right here is right up next to it,” Memphis’ WMC Action News 5 reported.

WMC Actions News 5 also reported that Memphis police are conducting an investigation into the graffiti.

Graceland is centered on the life and career of Elvis and annually attracts about 600,000 visitors, including international travelers.