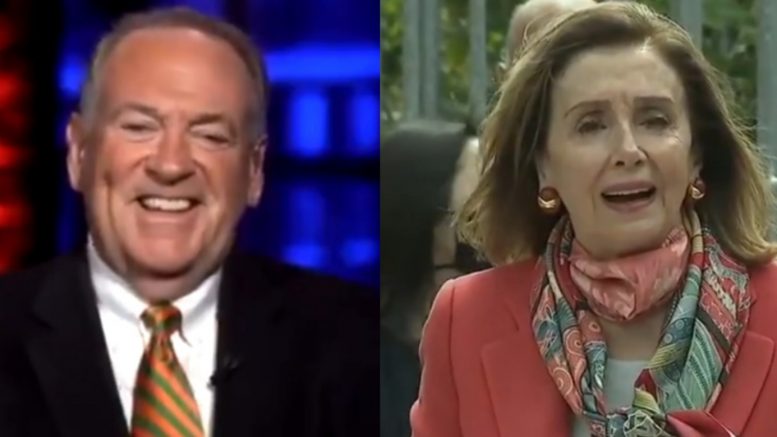 Former governor Mike Huckabee suggested that it’s best for House Speaker Nancy Pelosi to “keep her mouth shut at all times,” and he thinks most Americans would agree.

The statement by Huckabee came in reaction to Speaker Pelosi getting caught on camera not wearing a mask in a San Francisco salon that was closed due to the city’s coronavirus ordinance. She went on to blame the salon owner for the incident, and claimed she was “set up.”

Related Article: Mike Huckabee Reacts As Protest Erupts Outside Pelosi’s Home: “She Should Go Out & Serve Them Some Of That Fine Ice Cream She Keeps”

“If there’s one thing about which the American people can agree, it’s that Nancy Pelosi should keep her mouth covered at all times,” Huckabee told Fox News host Jesse Watters in regards to Salon-Gate. “And the fact that she defined that says it all. This has been such an outrage.”

“And of course, she’s been telling people that the President was virtually murdering people by the thousands because not enough people around him were wearing masks,” he continued. “But as soon as she got the opportunity not to have one on and the only camera was a security camera, hers came off in a place that wasn’t even supposed to be open.”

“And her entire defense is, ‘I was set up.’ Yea, because a security camera was, in fact, a setup for sure,” Huckabee sarcastically added. “This is just outrageuous.” Video Below

.@GovMikeHuckabee tells @JesseBWatters if there’s one thing all Americans can agree on is that @SpeakerPelosi Should keep her mouth covered at all times. pic.twitter.com/bbS3RAuwHE

Nancy Pelosi Says Lauren Boebert ‘Should Just Shut Up’, CO Rep. Responds: ‘What’s She so Torn up About?’