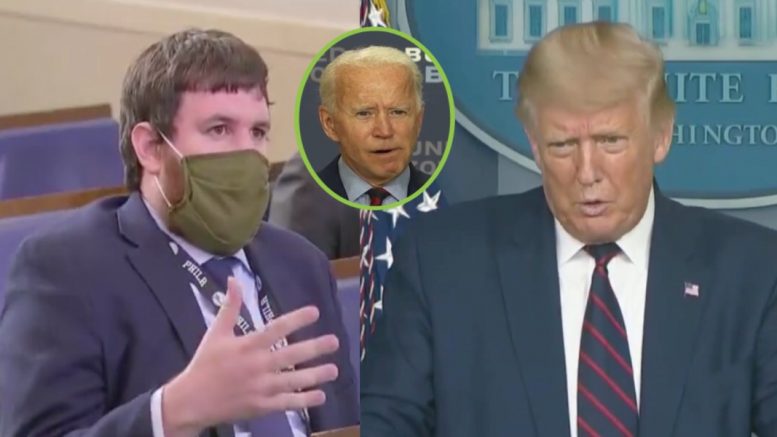 Multiple sources who were on the trip in question with President Trump, refuted the main thesis of The Atlantic’s reporting — that Trump canceled a trip to the Aisne-Marne American Cemetery, which is at the site of Belleau Wood, an important World War I battle, because he believed the dead soldiers to be “suckers” and “losers.”

(Related: Trump Officials Go On The Record To Vehemently Deny Anonymous Sources In The Atlantic Report)

During a Friday White House press briefing, President Trump slammed the “hoax” hit piece by The Atlantic and the reporters over their “child” questions they had asked to Democratic presidential nominee Joe Biden during a Friday news conference.

“There is nobody that feels more strongly about our soldiers, our wounded warriors, our soldiers that died in war than I do,” Trump told reporters. “It’s a hoax. Just like the fake [Steele] dossier was a hoax, just like the Russia, Russia, Russia was a hoax– no collusion. Just like so many other things; it’s a hoax. And you’ll hear more of these things, totally unrelated as we get closer and closer to the election.” Continued Below

“The magazine is a failing magazine, and nobody called me. Nobody called me from the magazine and said, ‘You have a comment about it?’ No, they just write whatever they want to write, because they figured you can’t get sued. You can get sued, but it’s very hard bringing lawsuits. But we have many witnesses. And it’s a total … it’s just a continuation of the witch hunt, so that it can hopefully effect the election,” Trump said.

The president told reporters that “the American people are too smart”, to believe the smear article.

“Whether it’s the fake dossier that turned out to be a total fraud or so many other things … I’ve been under investigation from before I even got elected. These people have gone after me more than any president in the history of the United States, and it’s a shame,” he expressed. Continued Below

The president also told reporters that he “watched the interview with Sleepy Joe Biden”, saying that they “didn’t ask questions like that” to Biden as they do of the Commander in Chief. Video Below

“And then when I watch Biden getting asked questions that are really meant for a child to answer, anybody could answer, and I look at the level of questions that you people ask– I mean, honestly, it’s disgraceful,” he declared.

“When a second rate magazine can write things like that about somebody that’s done so much for the military…and get a way with it— It’s a disgrace.” pic.twitter.com/oSc2RPuEh5

Bolton was in the room with POTUS when the decisions were being made https://t.co/gWGl5Fv795

Many of the questions for Joe Biden after his remarks today consisted of reporters asking Biden to elaborate on how bad Trump is. A list (not exact quotes): pic.twitter.com/0ixZlVcItz

Scarborough & Mika Ridicule Joe Biden Over His ‘No Malarkey’ Bus Tour: Somebody Has Spiked His ‘Milk Of Magnesia’