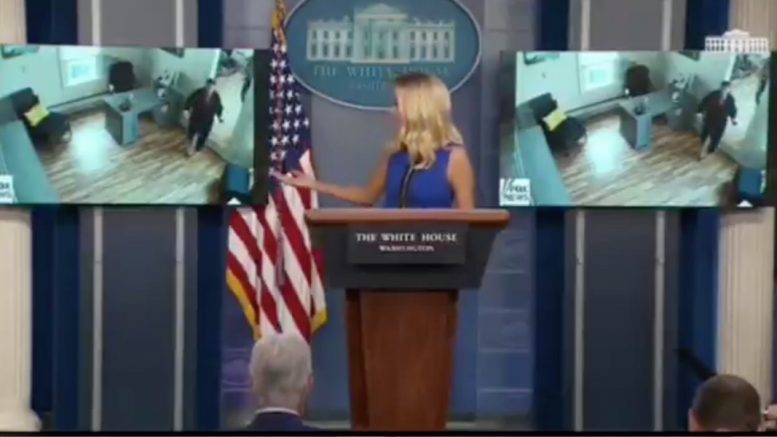 This comes after Pelosi on Wednesday, declined to apologize after getting caught on Monday afternoon for a wash and blow-out at ESalonSF and claimed she was “set up”, insisting that a hair salon in San Francisco “owes” her an “apology”, despite local ordinances keeping salons closed amid the coronavirus pandemic.

“Two briefings ago, I asked, ‘Where is Nancy Pelosi?’ Today, I can announce we have found Nancy Pelosi. As you can see, we found Nancy Pelosi going into her hair salon– we will be playing the video on loop for all of you to see during the duration of this introduction,” McEnany told reporters, while the clip of Pelosi played in the background.

She continued: “Nancy Pelosi was not in the halls of Congress when I asked where she was. She was not working in good faith to make a deal for the American people. Nope, Nancy Pelosi was found in San Francisco at a hair salon, where she was in doors, even though salons in California are not only open for outdoor service.”

Salons in San Francisco had been closed since March and were notified they could reopen on September 1st for outdoor hairstyling services only.

McEnany went on to tell reporters that Pelosi is “holding up 1.3 trillion dollars in relief for the American people while getting special access to the very kind of small businesses that this money would support, businesses like this hair salon.”

“Before she skipped town to violate her state’s health guidelines, Pelosi proposed a bill. It was called the HEROES Act, which contained no additional paycheck protection funding. This is funding that would help the small business she has bizarrely accused of plotting against her,” she continued.

The White House press secretary said that President Trump “sees through Democrats disregard for Americans in need and he took action, unilaterally, in his own accord”, noting the president “provided relief for evictions, provided unemployment insurance, paused student loan payments, and he cut the payroll tax, putting money in American people’s pockets”. Video Below

“Nancy Pelosi is demanding an apology from a single mother and small business owner who has received threats since Nancy Pelosi’s comments against her salon,” McEnany said, referring to Erica Kious the owner of eSalon, who gave the video footage to Fox News.

“Salon owner Erica Kious said this, ‘Since this happened, I’ve received nothing but hate text messages, death threats, saying they’re going to burn down my hair salon. It’s just sad that my community is pulling this, saying I through her under the bus, when I did not. So that’s hurtful. But yes, I think I’m pretty much done now'”, McEneany told reporters.

“Nancy Pelosi, you ought to apologize to the American people, or better yet, come back to Washington and get to work for hard working Americans like this salon owner that you maligned and demanded an apology from,” she concluded.

Related Article: Don Jr. On Pelosi Calling Her Hair Appointment A ‘Set Up’: “She’s Really The Mary Antoinette Of The 21st Century”