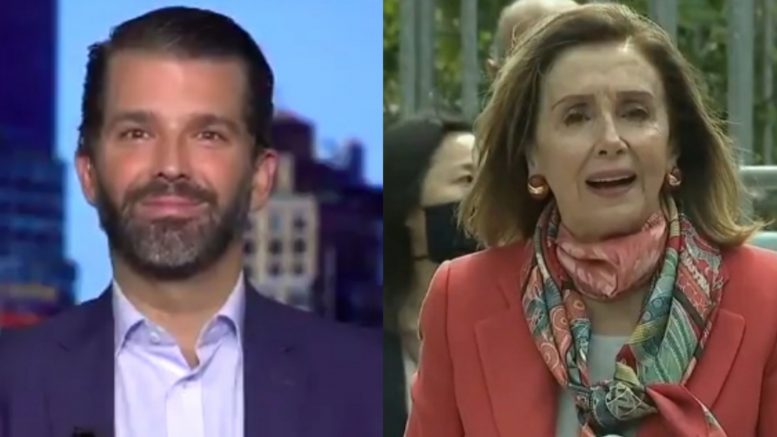 House Speaker Nancy Pelosi’s decision not to hold herself fully accountable for violating San Francisco’s coronavirus rules when attending a hair appointment is just the latest example of what Donald Trump Jr. considers to be “liberal privilege,” which also is the title of his new book.

After a video went viral showing the House Speaker not wearing a mask while getting her hair done up inside of a salon that was supposed to be closed due to restrictions, Pelosi stopped short of apologizing directly for her actions and instead called the entire situation a “set up” and insisted that the salon “owes” her an “apology.”

“I take responsibility for trusting the word of the neighborhood salon that I have been to over the years, many times,” Pelosi told reporters Wednesday. “When they said we’re able to accommodate one person at a time, and that we can set up that time, I trusted that.”

She added: “As it turns out, it was a set up. So I take responsibility for falling for a set up. And that’s all I’m gonna say on that.”

“The salon owes me an apology for setting [me] up. … We need to get back to work, many [are] annoyed at the set up that was there for a purpose, that has nothing to do with the– ending the crisis. … It was clearly a set up. I take responsibility for falling for a set up by a neighborhood salon that I’ve gone to for years. And that’s really what it is,” Pelosi vented.

In response, Donald Trump Jr. likened Pelosi to Mary Antoinette, the Queen of France in the 1700’s whose lavish lifestyle and extravagant pouf hairstyle eventually led to her being denounced, as her style was out of touch from ordinary French women at the time. Continued Below

He continued: “Nancy Pelosi — whether it’s the salon, whether it’s the $25,000 freezer and the custom, tailor-made ice cream that she had a gave an interview in the middle of the pandemic — she’s really the Mary Antoinette of the 21st century. She’s so out of touch with real Americans, and yet she’s supposedly representing them,” he added.