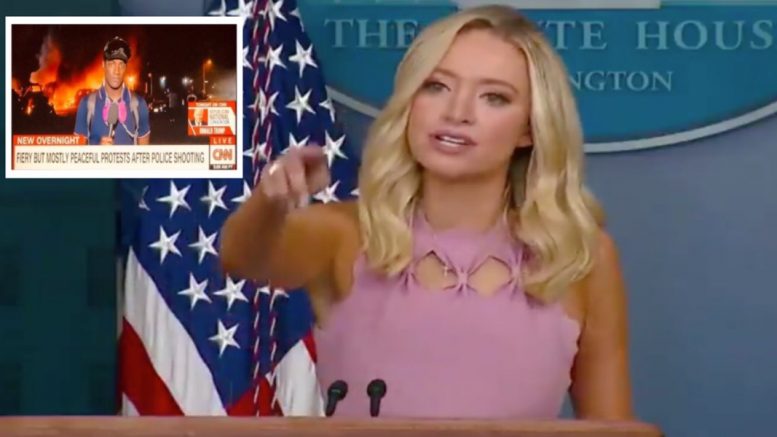 Press secretary Kayleigh McEnany fired back at Portnoy for refusing to ask about the ongoing violence from Antifa for the last 90 days.

“What about the video of them scuffling, shooting paintballs at people and getting in the mix with people? Is that patriotic activity?” Portnoy asked McEnany.

The White House press  secretary responded, telling the CBS News White House correspondent that she does not “think the president has seen that video”, adding, “Nor have I.”

“But if you’re going to ask about paintballs, it’s incredible that for 90 days I have stood at this podium talking about officers who have– lasers flashed in their eyes in attempt to blind them, commercial grade fireworks being thrown at them, a church right out here burning down, the people that were harassed and yelled at: Senator Rand Paul, Dan Bongino, right out here,” McEnany continued.

(Related: Fox News Cut Away From WH Press Briefing After McEnany Showed A Video Of Violent Protests In Portland)

“There’s been 90 days of violence from leftwing anarchists. It’s incredible that today is the one time that you’re interested in violence when it’s paintballs, and we don’t even know who set off these paintballs,” the White House press secretary said.

“But you fail to ask for 90 days about violence from an anarchist organization because it happens to be on the left,” McEnany pointed out. Video Below

Kayleigh McEnany to reporter: "For 90 days I've stood at this podium talking about officers who have had lasers flashed in their eyes… the people that were harassed & yelled at — Sen. @RandPaul, @DBongino right out here — & you're going to ask me about a paintball video?" pic.twitter.com/CZwFqKge20

Antifa clash with drivers in the Trump caravan in downtown Portland. They spray urine at the cars, others spray mace and shoot paintballs back. #PortlandRiots #antifa pic.twitter.com/YvaIzsNuUU

McEnany concluded by calling out Democratic lawmakers and the media for ignoring the violence that has occurred for 90 days, adding: “Because the polling has shifted, now it is time for the Democrats to deny what they said previously and all of a sudden focus on law and order. That’s like the arsonist blaming the firefighter.”

"Because the polling has shifted, now it is time for the Democrats to deny what they said previously and suddenly focus on law & order. That's like the arsonist of blaming the firefighter." — @PressSec Kayleigh McEnany pic.twitter.com/kAHGGDgXAM

(Related: Portland Adults Entice Children To Say ‘F— The Police’ & Carry Signs, Don Jr. Reacts: “These Parents Should Be Ashamed Of Themselves”)