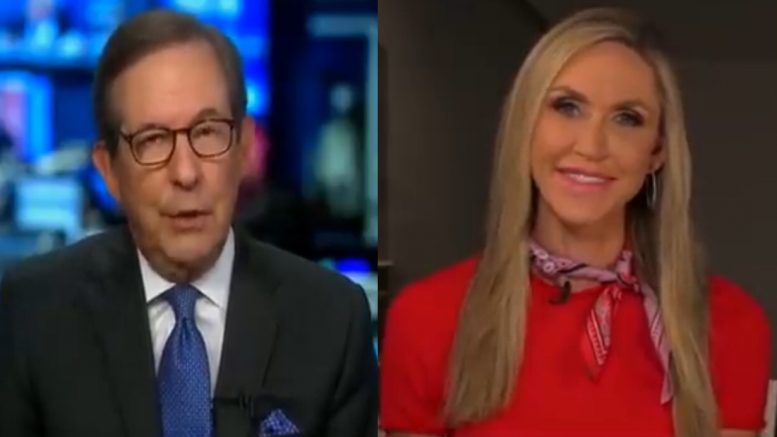 President Donald Trump’s daughter-in-law, Lara Trump, spoke with host Chris Wallace on “Fox News Sunday”, responding to the criticism the president faced after holding the fourth night of the Republican National Convention at the White House with guests in the South Lawn.

Wallace pressed Lara over whether the president is “going to ignore the public health guidelines”, to which Trump’s daughter-in-law ultimately leveled the Fox News host’s criticism when he implied President Trump’s RNC speech was a “super-spreader event”.

“But I think, you know, as it always works out, people always rush towards the front of the stage they want to be around this President, they pack themselves in,” she continued, adding: “Look, at a certain point in this country, I think we all have to recognize the people want to get back to normal, and you know what? Maybe it’s going to a Trump rally that does that. But we are always following the guidelines.”

Lara also explained they had “health professions work with our convention team the entire time”, adding: “We followed exactly what they said we should do. And we’ll continue to do that.”

Chris Wallace followed up, suggesting that the president did not follow guidelines, saying, “You did stack the chairs right next to each other. Some health officials say, ‘This has the potential to be a super-spreader event.'” Continued Below

Lara Trump responded: “Yeah, well, it was an outdoor venue. And I’ll remind everybody that the folks that were spitting in the faces of our people leaving the convention that night were not social distancing. It was an absolutely disgusting display.”

“The next day, there were … thousands of people on the Nation Mall all packed together, as well,” she pointed out, referring to the thousands of Black Lives Matter protesters who had gathered Friday at the Lincoln Memorial to commemorate the historic civil rights March on Washington and protest for police reform.

“So look, we either have to say that everybody plays by the same rules or we have to stop talking about it. Because whenever you’re talking about the President’s campaign, you know, and how people weren’t specifically socially distant, but the next day, thousands of people on the National Mall and that’s not a problem for anybody. It seems a little hypocritical,” the President’s daughter-in-law added. Video Below

Lara Trump’s full remarks; her comments regarding the RNC Convention begin at 5:45 into the video:

Meanwhile, thousands of Black Lives Matter protesters congregated in Washington, DC, just one day after President Trump’s speech. Demonstrators could be seen in videos and images not social distancing, among other CDC guidelines not followed. Continued Below

Twitterverse was quick to point out Sen. Murphy’s hypocrisy:

Massive crowds descended on the steps of the Lincoln Memorial to protest police brutality and racist violence on Friday. More @business: https://t.co/Ywy3UqVeSP pic.twitter.com/zWQfkSwrqT