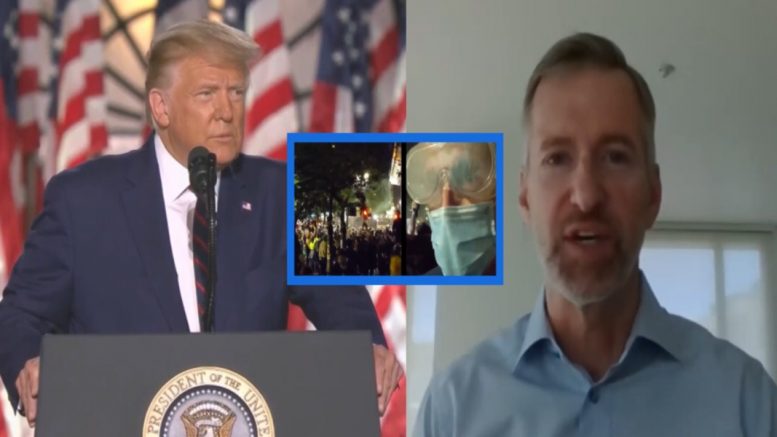 The Commander in Chief took to Twitter Friday afternoon wondering if Portland is “listening” after the National Guard “moved in” to help assist Kenosha, Wisconsin, noting “no further violence” has occurred, following unrest in the city after Jacob Blake was shot by a police officer.

“Success: Since the National Guard moved into Kenosha, Wisconsin, two days ago, there has been NO FURTHER VIOLENCE, not even a small problem. When legally asked to help by local authorities, the Federal Government will act and quickly succeed. Are you listening Portland?” President Donald Trump asked.

Following the Commander in Chief’s Friday tweet, Democratic Mayor of Portland, Oregon, Ted Wheeler, took to twitter to announce that he sent a letter President Trump “declining his recurring offer to aid Portland by sending federal enforcement to the city.”

“Yet again, you said you offered to aid Portland by sending in federal law enforcement to our city. On behalf of the City of Portland: No thanks,” Wheeler wrote in part.

“We don’t need your politics of division and demagoguery. Portlanders are onto you. We have already seen your reckless disregard for human life in your bumbling response to the COVID pandemic. And we know you’ve reached the conclusion that images of violence or vandalism are your only ticket to reelection,” he said. Continued Below

“There is no place for looting, arson, or vandalism in our city. There is no room here for racist violence or those who wish to bring their ideology of hate into our community. Those who commit criminal acts will be apprehended and prosecuted under the law,” Wheeler claimed in his letter to the Commander in Chief.

“When you sent the Feds to Portland last month, you made the situation far worse. Your offer to repeat that disaster is a cynical attempt to stoke fear and distract us from the real work of our city. Stay away, please,” he added.

Today, I sent this letter via email to @realDonaldTrump declining his recurring offer to aid Portland by sending federal enforcement to the city. https://t.co/W85EDfriyk pic.twitter.com/CC1IWTp5k8

In July, Wheeler was tear gassed while he was at the federal courthouse with protesters. He was accompanied by “at least four body guards”, according to reporter Andy Ngo.

“I’m not gonna lie, it stings, it’s hard to breathe,” Wheeler said. “Man, uh, I can tell you with 100% honesty, I saw nothing that provoked this response. It’s absolutely stunning. I’m not afraid, but I am pissed off.” Continued Below

This is what the media don't want to show you.

That's why they cut away as soon as @PressSec started showing this video. pic.twitter.com/tc3AABdxt4

Overnight on 26–27 Aug, around 200 #antifa attacked the Portland ICE facility on the 93rd night of violent protests. They pepper-sprayed officers & threw eggs & rocks at them. One officer was injured by a large rock. Rioters vandalized the building. https://t.co/gXCMh2pw6F

Overnight on 25–26 Aug., hundreds of antifa smashed up & went inside Portland City Hall. They tried to set the building on fire. They threw rebar ties on the street to puncture police tires & slow response time. 23 adults were arrested. #PortlandRiots https://t.co/Xyw9u1zoxi