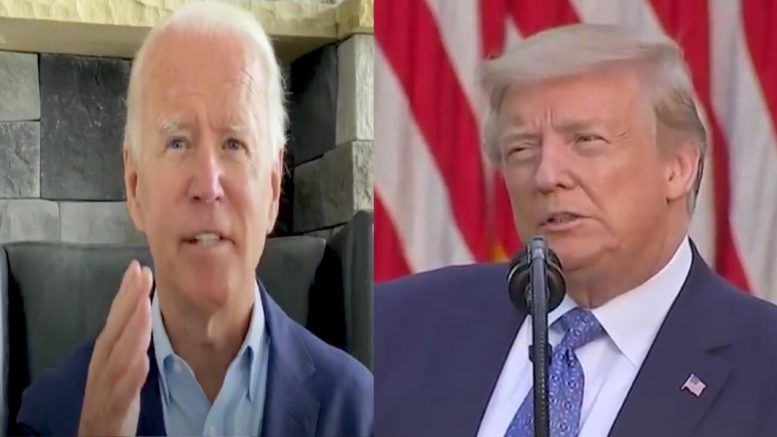 On Wednesday, President Donald Trump and Democratic presidential nominee issued contrasting responses amid chaos that has erupted in Wisconsin, following Jacob Blake, who was shot multiple times by police in Kenosha.

The Commander in Chief said on Wednesday that he will send federal law enforcement and the National Guard to Kenosha to restore “law and order”.

“We will NOT stand for looting, arson, violence, and lawlessness on American streets. My team just got off the phone with Governor Evers who agreed to accept federal assistance (Portland should do the same!)” the president tweeted on Wednesday.

He added: “TODAY, I will be sending federal law enforcement and the National Guard to Kenosha, WI to restore LAW and ORDER!”

Wisconsin Gov. Tony Evers, a Democrat, had called for calm earlier Tuesday, while also declaring a state of emergency under which he doubled the National Guard deployment in Kenosha from 125 to 250. The night before, crowds destroyed dozens of buildings and set more than 30 fires in the city’s downtown.

Deadly violence broke out during the third night of civil unrest in Kenosha, Wisconsin. Two people were killed, and a third was hospitalized with serious, but not life-threatening injuries, the Kenosha Police Department said in a statement. Continued Below

Meanwhile, Joe Biden released a video message on Twitter following CNN’s Don Lemon pointing out that Democrats are “ignoring” unrest and that it represent a “blind spot” for the party. Lemon also said, “It’s showing up in the polling. It’s showing up in focus groups. It is the only thing … right now that is sticking,”

Appearing to read a prewritten statement, Joe Biden said: “What I saw in that video makes me sick. Once again, a black man, Jacob Blake, has been shot by the police in broad daylight with the whole world watching.”

“Protesting brutality is a right and absolutely necessary, but burning down communities is not protest, it’s needless violence– violence that endangers lives and guts businesses and shutters businesses that serve the community. That’s wrong,” he added. Continued Below

Once again, a Black man — Jacob Blake — was shot by the police. In front of his children. It makes me sick.

Is this the country we want to be?

Needless violence won’t heal us. We need to end the violence — and peacefully come together to demand justice. pic.twitter.com/WdNqrxA3PK

(Related: Mother Of Jacob Blake Pleads For Healing Amid Unrest: “Please, Let’s Begin To Pray For Healing For Our Nation”)