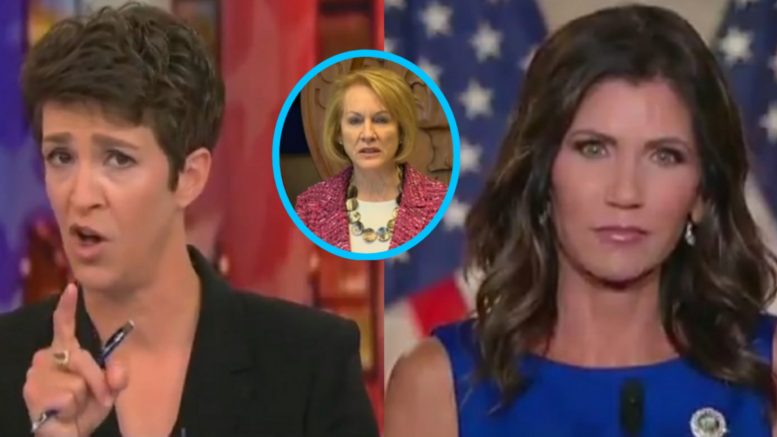 MSNBC host Rachel Maddow was not pleased by what South Dakota Governor Kristi Noem had to say about Democrat-led cities during Wednesday’s airing of the Republican National Convention.

In fact, Maddow was so upset to the point that she had to “interject” immediately following Noem’s appearance.

During her speech, Gov. Noem said, “It took 244 years to build this great nation — flaws and all — but we stand to lose it in a tiny fraction of that time if we continue down the path taken by the Democrats and their radical supporters.”

“From Seattle and Portland to Washington and New York, Democrat-run cities across this country are being overrun by violent mobs,” she continued. “The violence is rampant. There’s looting, chaos, destruction and murder. People that can afford to flee have fled. But the people that can’t — good, hard-working Americans — are left to fend for themselves.”

Moments after Gov. Noem ended her speech, Rachel Maddow cut in and said she had to “interject here for just one moment,” and cited that the network would “interject when we feel like there’s something that’s important and deliberate and very wrong that should be corrected just so that we feel responsible about our broadcast.” Continued Below

Maddow then referenced Noem saying that “Democrat-run cities” across America “are being overrun by violent mobs.”

And who did she bring on to help provide a so-called “reality check” to Gov. Noem’s assertion? None other than Seattle’s mayor Jenny Durkan, who has faced intense criticism over her handling of chaos in Seattle.

In her rebuttal, Durkan attempted to blame President Trump and Fox News for hindering her ability to serve as mayor during Seattle’s chaotic times.Videos Below

NOT A JOKE: MSNBC interjects after @KristiNoem‘s #GOPConvention‘s speech because Maddow said Noem was “very wrong” to say Democrat-led U.S. cities like New York, Portland and Seattle have been overrun by crime and looting. For this “reality check,” she brought on…Jenny Durkan! pic.twitter.com/YvSXEs9IqS

And here’s part two. Maddow takes great offense to @KristiNoem‘s “caricature” of Democrat-run cities while Durkan says her ability to effectively serve as mayor has been hindered “because the president and Fox News were so insistent on driving that message.” #GOPConvention pic.twitter.com/3uFQO1r2tC

Governor Noem fired back at Mayor Durkan after learning of her rebuttal.

Noem boldly asked: “Where was Mayor Durkan when CHOP or CHAZ (or whatever they called it) took over her city?”

Where was Mayor Durkan when CHOP or CHAZ (or whatever they called it) took over her city? https://t.co/Rxug8WVOyP

In ending, here is Governor Noem’s full address at night #3 of the convention: