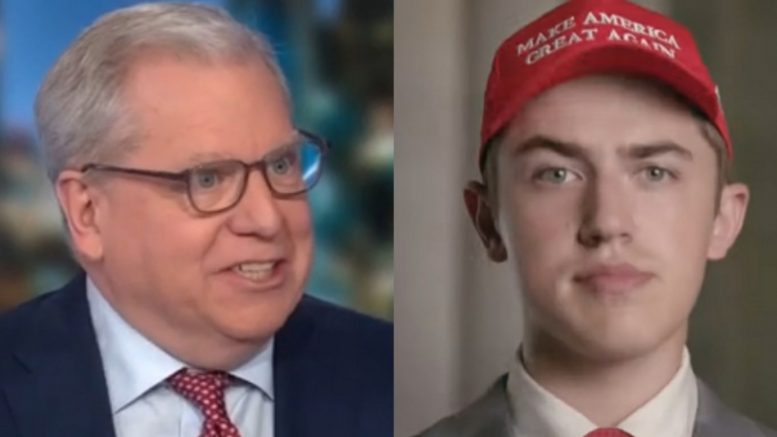 Sandmann, who is a Kentucky resident, capped off his much-anticipated convention speech donning a red MAGA hat at the very end, which helped commemorate the viral video that made him famous a year and a half ago while attending the March For Life.

Mainstream news outlets and political figures defamed the Covington Catholic High School graduate, which eventually led Sandmann’s legal team to issue lawsuits, two of which have been settled for an undisclosed amount with CNN and the Washington Post.

After telling his side of the story of what it was like getting smeared by the left, Sandmann said, “I look forward to the day that the media returns to providing balanced, responsible and accountable news coverage. I know President Trump hopes for that too. And I know you’ll agree with me when we say that no one in this country has been a victim of unfair media coverage more than President Donald Trump.”

Lockhart didn’t specifically say Sandmann’s name, but it didn’t take long for Twitterverse to figure out that he was likely targeting the Covington Catholic High School graduate.

The Federalist’s Molly Hemingway was among one of the first to call attention to Lockhart’s post.

CNN political analyst describes Nick Sandmann, the teenager who addressed at Republican convention the media’s shocking persecution of him for his pro-life, pro-Trump views, as “snot nose entitled kid” https://t.co/pEq7ZmlliW

Others soon chimed in and slammed the CNN analyst. Here are some of the most highly-engaged reactions:

What a stupid, self-destructive thing to say.

Oh yeah super entitled: @N1ckSandmann was attacked, vilified & smeared by the entire left-wing media in this country & around the world. This is a young boy who could not go out in public without being harassed &attacked. How would U feel @joelockhart? #hateful #bully #liar #tcot

Keep yapping, Chubby. Maybe he can get your lunch money too.

Indeed. @N1ckSandmann should call @joelockhart into his office for a “closed door meeting.” You don’t talk publicly about your boss like that. 😂

You just hate Nick Sandmann because CNN has had to pay him exponentially more than you.

His name is Nick Sandmann pic.twitter.com/mebaeO0zHv