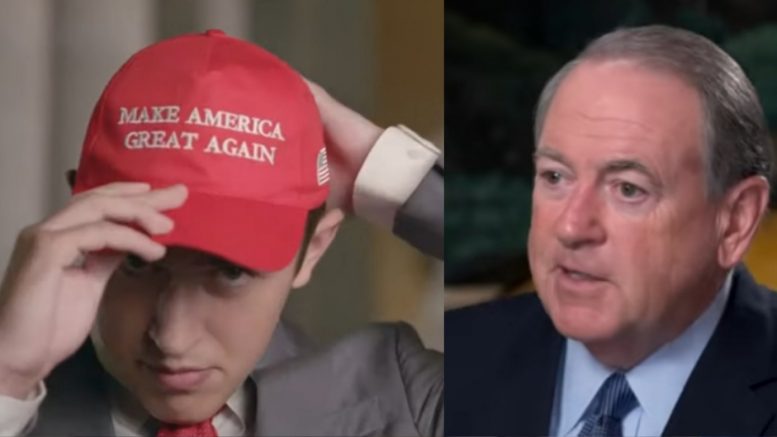 Teenage conservative sensation Nick Sandmann capped off his much-anticipated convention speech in epic fashion on Tuesday, as he was seen donning a red MAGA hat at the very end.

The moment helped commemorate the viral video that made Sandmann famous a year and a half ago at the Lincoln Memorial while attending the March For Life. Mainstream news outlets and political figures defamed the Covington Catholic High School graduate after he remained calm when a Native American protester named Nathan Phillips got in his face and taunted him as he banged a drum.

News sources suggested that Sandmann, who was wearing a red MAGA hat at the time of the encounter, was smirking and mocking the man; however, further media showed otherwise. Sandmann has since sued mainstream outlets that took part in the smear job, and he has already settled for an undisclosed amount with CNN and the Washington Post.

In his convention speech, Sandmann revealed that he bought his MAGA hat during the March For Life because “Donald Trump has distinguished himself as one of the most pro-life presidents in the history of our country, and I wanted to express my support for him too.”

After telling his side of the story of what he went through when getting character assassinated, Sandmann said, “I look forward to the day that the media returns to providing balanced, responsible and accountable news coverage. I know President Trump hopes for that too. And I know you’ll agree with me when we say that no one in this country has been a victim of unfair media coverage more than President Donald Trump.”

Sandmann closed out his speech by saying “Let’s make America great again.” He then pulled out his MAGA hat and placed it on his head. Video Below

Former Arkansas governor Mike Huckabee tweeted the following reaction to Sandmann’s speech: “What do you bet Jeff Zucker & the anchors at CNN are pooping their pants watching Nick Sandmann who successfully sued CNN for cowardly, defamatory, & utterly false reporting about an innocent teen! I love that kid!”

What do you bet Jeff Zucker & the anchors at CNN are pooping their pants watching Nick Sandmann who successfully sued CNN for cowardly, defamatory, & utterly false reporting about an innocent teen! I love that kid!

In ending, here are a few more reactions to Sandmann’s convention speech:

I love this kid! #NickSandman. I literally applauded when he put that hat on.

Nick Sandmann showed more class than the “adults” who tried to bully him, the cable networks that pivoted from attacking people who disagreed with gun control kids to smearing Sandmann, and the talking heads who tried to pile on for more air time. Sandmann won.

WOW! The highest paid person at the Washington Post and CNN speaks at the RNC.. pic.twitter.com/z3oUtCx0O1