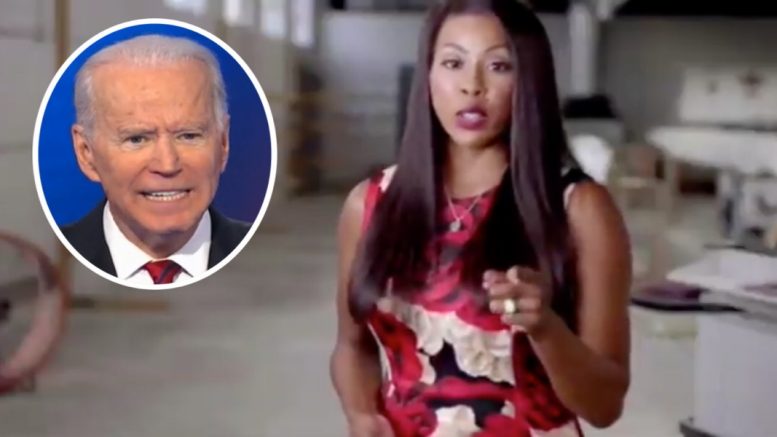 She began by explaining that “Democrats have controlled this part of Baltimore for over 50 years, and they have run this beautiful place right into the ground, abandoned buildings, liquor stores on every corner, drug addicts, guns on the streets” adding, “that’s now the norm in every neighborhoods”.

Kimberly Klacik said “you would think” Maryland tax payers “would get a whole lot since our taxes are out of control”, but suggested instead, that taxpayers are “paying for decades of incompetence and corruption”.

“Sadly the same cycle of decay exists in many American Democrat run cities. And yet, the Democrats still assume that Black people will vote for them, no matter how much they let us down and take us for granted. We’re sick of it. We’re not gonna take it anymore. The days of blindly supporting the Democrats are coming to an end,” she warned.

“In Baltimore we have the highest number of Black Republicans in the entire country running for office in this election cycle,” Klacik said.

The Baltimore Republican candidate then announced: “Joe Biden believes we can’t think for ourselves– that the color of someone’s skin dictates their political views. We’re not buying the lies anymore. You and your party have neglected us for far too long.” Continued Below

“We want safety in our neighborhoods, we want to make the most of the federal opportunities zones I’m standing in right now, in West Baltimore. We want higher paying jobs and more business opportunities. We want lower taxes, we want school choice, we want a chance to get ahead, not just get by,” Kimberly Klacik explained.

Klacik said that she wants Baltimore to “be an example to Republicans around the country”, clarifying, “That we can compete in our inner cities if we reach out to the citizens and deliver real results.” Video Below

“And then, I’m asking you to help me start this great Baltimore comeback. Thank you, and God Bless America,” she concluded.

Kim Klacik: "The Democrats still assume that Black people will vote for them no matter how much they let us down and take us for granted. We're sick of it. We're not going to take it anymore. The days of blindly supporting the Democrats are coming to an end." #RNC2020 pic.twitter.com/28fmxP6PI1

Democrats don’t want you to see this.

They’re scared that I’m exposing what life is like in Democrat run cities.

That’s why I’m running for Congress
Because All Black Lives Matter
Baltimore Matters
And black people don’t have to vote Democrat
Help us win https://t.co/CSOjc9aQlS pic.twitter.com/XnEDTaDDIG