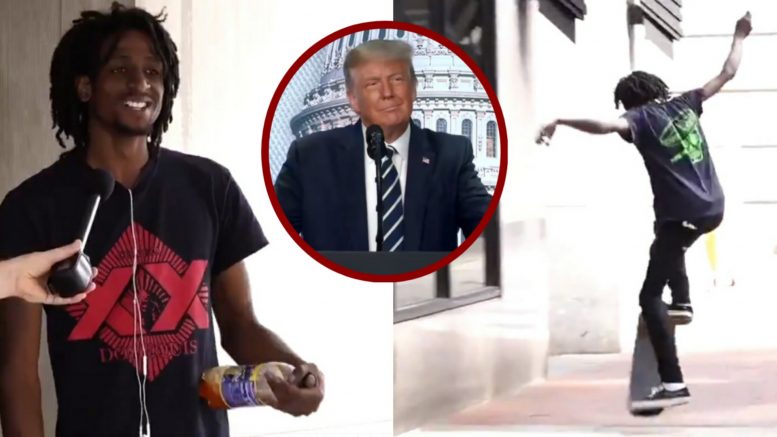 A skateboarder from Joe Biden’s hometown of Wilmington, Delaware, took Turning Point USA’s Benny Johnson by surprise after confessing that he is on the Trump Train.

While being interviewed, the skateboarder, whose name is ‘Kai,’ told Benny that there isn’t really anything Joe Biden has said that “stands out” to him other than the infamous “You ain’t black” remark that the former Vice President made while taking questions from Charlamagne Tha God.

Asked by Benny what his political position is, Kai said, “I wouldn’t say whether if I’m a Democrat or a Republican — I listen to reason at the end of the day.”

“I guess the two biggest candidates for this would be Joe Biden and President Donald Trump, and, you know, I’m not the biggest Trump fan but I’m on the Trump Train,” he added.

“I just appreciate his honesty,” Kai replied when asked why he is on the Trump Train. “He just doesn’t fit the normal criteria for a normal politician, but I really, truly think he has all good intentions.”

“If we were to go into a next presidential term, we can look back and look at what he’s done and honestly be kind of impressed,” he declared. “And I think that’s why a lot of people did vote for Trump because he’s not a regular politician, and we’re just kind of tired of the same bull crap over and over.”

In terms of how President Trump has handled the COVID-19 pandemic, Kai said, “I think he’s done a particularly good job. Things could have been a lot worst, honestly.”

Kai then issued the following message to President Trump: “Keep your head up. A lot of people are going to talk bad about you no matter what you do, when who you are. Just keep the good intentions going. Keep doing good, and, I think, over time people [are] gonna look back and them be like, ‘Trump wasn’t so bad at all.” Video Below

I went to Joe Biden’s hometown of Wilmington Delaware to talk to the people who live there about Joe Biden.

While we were filming a young man skateboarded up to me and said – “Can we do an interview?”