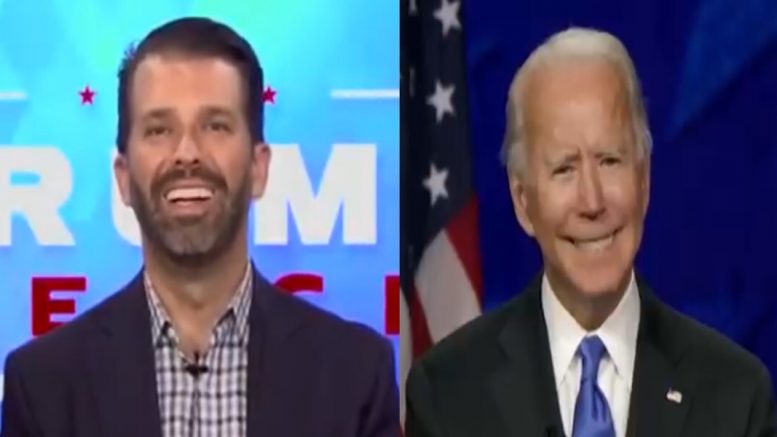 “Literally he was elected into D.C. office in his twenties. So now, half a century later, Laura, he managed to read a speech on a teleprompter,”  Don Jr. told host Laura Ingraham on Fox News’ “The Ingraham Angle”.

“He refuses to answer questions from the American people or journalists, he’s been hiding in a basement but now he’s gonna also change things,” Donald Trump Jr said. “I really don’t think anyone believes that. I don’t think Joe Biden’s ever been inspiring in his career, and I don’t think tonight was any different.”

He added that Biden “hasn’t done anything to deserve inspiration through a very long and very swampy career.”

“He also lied– you know, he brings back the Democrats only– their only easy button going back to the lie about Charlottesville. He talked about being tough on China. Joe, I mean, you’re gonna be tough on China now? Joe spent his entire career building China. When Joe started pushing and shilling for them to get permanent status in the World Trade Organization, China had an economy the size of the Netherlands,” Trump Jr. noted. Continued Below

“He didn’t talk much about Hunter strangely enough. I wonder why,” he said. “Hunter Biden took $1.5 billion from the Chinese government. To the average person in a fund, just so you’re aware, that’s $30 million a year in fees … annual. You think Joe’s going to get tough on China now? Joe fought for NAFTA, … for TPP, all of the deals that literally destroyed the American dream. Our only export under Joe Biden’s 50 tenure has been that American dream to countries that hate our guts and have been manipulating us for decades,” Don Jr. said.

“Donald Trump’s the first guy to stand up to those people. He’s the first guy to actually get deals done, whether it be with China, whether it be a peace deal in the Middle East. Where’s Joe Biden been? You’re right. He was in control for eight years with Barack Obama. Why didn’t they do any of these things? If Joe Biden knew how to fix it anything, why didn’t he tell Barack Obama how to do it? Why didn’t he get it done? he asked. Video Below

Laura Ingraham responded, joking that “Barack Obama was keeping it secret to give to Joe for later use when he was running, you see”.

Trump Jr. told Ingraham that he thinks Biden will try to get out of the debates with President Trump however he can.

Joe Biden talking about getting America away from its dependence on China is the least self-aware comment anyone has ever made in politics given his half a century shilling for them and pushing for their permanent trade status in the WTO! And don’t forget Hunter’s $1.5 Billion!

(Related: Levin Issues A Call To Action To All ‘Patriotic Americans’ In Wake Of The DNC: “Stand Up For Your Country Cause They’re Trying To Take It From You”)