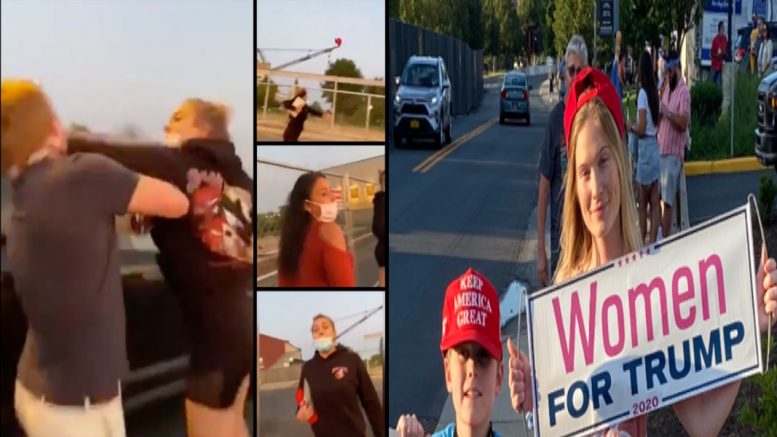 On Thursday outside of the DNC Convention, a 7-year-old boy named Riley and his mother Abbey Wigton, were allegedly targeted by a couple of women due to their support for President Donald Trump in Wilmington, DE.

Abbey released a statement saying that she was waiting for a table with her son at a restaurant after a peaceful protest against the Democratic presidential nominee when she was harassed by two “Joe Biden supporters” upset about her pro-Trump sign and her son’s “Make America Great Again” hat.

Moments ago outside of the DNC convention, Joe Biden supporters attacked a 7 year-old boy.

He was attacked simply because he wore a @realDonaldTrump hat.

His name is Riley.
Watch it happen.
Listen to him cry.

Will Joe condemn this violence against Children?

Mother, Abbey and her son Riley:

Here are photos of the victims.

Mother, Abbey and her son Riley.

They were just waiting for a table at a restaurant across from the DNC convention when the attack happened.

If Joe Biden supporters will do this to children — what will they do you you?

Abbey Wigton, released a statement saying: “I was with my 7 year old son across the street from Joe Biden’s DNC Convention speech in Wilmington, Delaware. We were waiting for a table at a restaurant to eat dinner when the attack happened. My son was wearing his MAGA hat. We were standing outside peacefully minding our own business waiting for our table. Suddenly, two Joe Biden supporters began to yell political epithets at my child. They ripped the sign from my arms and assaulted my seven year old son.”

“The Joe Biden supporters laid hands on my child and ripped his ‘Make America Great Again’ hat from his head while cursing at him and pushing him over. The two Joe Biden supporters verbally and physically assaulted my child. My 7 year old child was sobbing and screaming,” Wigton said.

She continued: “Filled with the instinct to defend my child against his attackers I attempted to confront the Joe Biden supporters. All I wished to do was retrieve my 7 year old son’s MAGA hat. I was punched in the face multiple times by Joe Biden supporters. They stole my sons hat and threw it over the fence into a dirt filled construction site where we could not retrieve it. Both Joe Biden supporters attacked me. They attacked my child. I am a mother who simply wants to protect my child from those who would harm him.”

“Will Joe Biden disavow what his supporters did to my son?” Wigton asked. “I have not heard anything from anyone at the DNC. This vicious attack on a child is exactly why I will be voting for Donald Trump. If children aren’t off limits to their violence – who is?” Continued Below

A police report was allegedly filed after the incident.

Following the incident, former secret service agent Dan Bongino took to Twitter, posting the video of the attack against Riley, and asking, “Mr. President, Can you get this young man a new MAGA hat?”

Friday morning, Riley reportedly got a call from the White House and will be getting a replacement hat:

It looks like Riley will be getting a very special replacement hat… pic.twitter.com/GPIbjAJ04Z

Joe Biden supporters stole Riley’s hat, ripped up his sign & made him cry.
Watch. It’s on video. This is sick.

Do your thing, internet. pic.twitter.com/7SAgRn1pcm

In June, State Representative Vernon Jones (D) announced that he would introduce the Jones Amendment, which will accompany other hate crime legislation to make it punishable by law to commit a crime based on a person’s political party affiliation or ideology.

Rep. Jones wrote on Twitter, explaining he has “watched countless videos of Trump supporters getting attacked in the streets simply due to their support of President Donald Trump”.

He tweeted: “Political affiliation should be a protected class, right alongside race, gender, and religion, and my legislation will do just that. Making any politically motivated attack a HATE CRIME. Wearing a MAGA hat should never endanger your life.”

Jones added: “I’ve watched countless videos of Trump supporters getting attacked in the streets simply due to their support of @realDonaldTrump. Let’s call this what this is: a hate crime. And as we return to the legislature next week, I’ll be introducing legislation that’ll make it such.”

Lewandowski Paints A Depiction Of Who The ‘Whistleblower’ Is: ‘This Is Like Spaceballs The Movie’