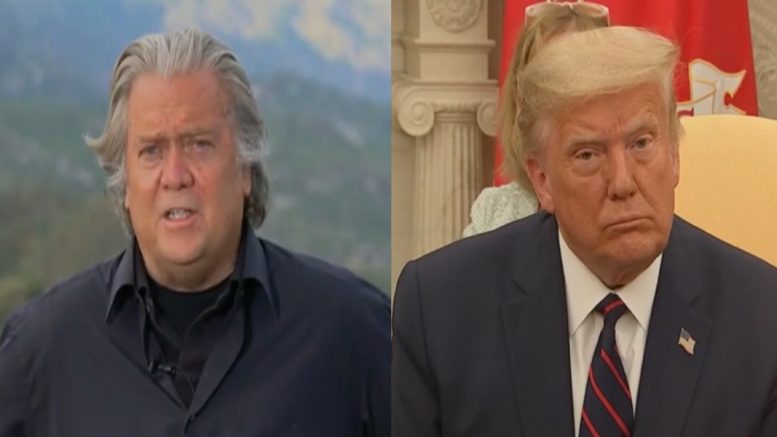 During a bilateral meeting in the Oval Office Thursday with Iraqi Prime Minister Mustafa al-Kadhimi, President Donald Trump told reporters that he feels “very badly” that his former adviser Steve Bannon was arrested and indicted in connection with an online fundraising campaign that allegedly defrauded donors of hundreds of thousands of dollars, while calling the project “inappropriate.”

Steve Bannon, a former adviser to President Trump, was among four suspects arrested Thursday and indicted in connection with an online fundraising campaign that allegedly defrauded donors of hundreds of thousands of dollars, the Justice Department announced,

According to the indictment, Bannon and co-defendant Brian Kolfage told the public that they were a “volunteer organization” and that 100% of the money raised would go toward their stated goal, which was to raise money for the federal government to build a wall along the U.S.-Mexico border.

“Those representations were false,” the indictment said. Prosecutors claim that Kolfage, Bannon, Andrew Badolato and Timothy Shea took money for themselves as the campaign raised upward of $25 million. The indictment alleges that Bannon received more than $1 million through a nonprofit that he then used for personal expenses and to pay Kolfage. Continued Below

Prosecutors say Bannon and the others used the nonprofit and a shell company to hide the payments to Kolfage “by using fake invoices and sham ‘vendor’ arrangements,” as well as other means of keeping the payments quiet. The indictment stated that in order to raise funds, Kolfage and Bannon “repeatedly and falsely” told the public that Kolfage would “not take a penny” in compensation.

“As alleged, the defendants defrauded hundreds of thousands of donors, capitalizing on their interest in funding a border wall to raise millions of dollars, under the false pretense that all of that money would be spent on construction,” Acting U.S. Attorney Audrey Strauss said in a statement. “While repeatedly assuring donors that Brian Kolfage, the founder and public face of We Build the Wall, would not be paid a cent, the defendants secretly schemed to pass hundreds of thousands of dollars to Kolfage, which he used to fund his lavish lifestyle.”

President Donald Trump told reporters Thursday that he didn’t “know anything about the project at all” but also said he “didn’t like” it. “I think it’s a very bad thing for Bannon. It’s surprising. … I thought it was being done for showboating reasons. … But it’s sad. It’s very sad,” he said. Video Below

White House press secretary Kayleigh McEnany separately released a statement saying that Trump had “no involvement” in the project and that he disapproved of it. McEnany pointed to a July 2020 tweet in which Trump said a reportedly defective section of the border wall constructed with funding from the “We Build The Wall” project had been built to embarrass him, The Hill reported.

“I disagreed with doing this very small (tiny) section of wall, in a tricky area, by a private group which raised money by ads,” President Trump wrote in the July 12 tweet. “It was only done to make me look bad, and perhaps it now doesn’t even work.  Should have been built like rest of Wall, 500 plus miles.”

President Trump Has Flipped The 9th Circuit Court After Naming 10 Judges, Sending A ‘Shock Wave Through The System’