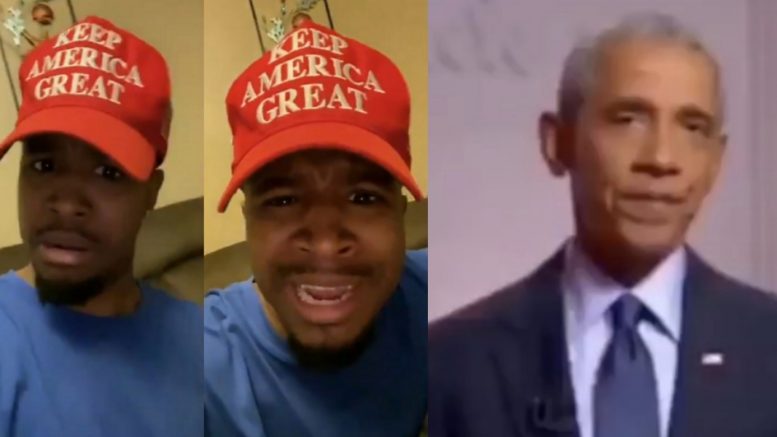 Pro-Trump comedian Terrence Williams was fired up after hearing some of the remarks that former President Barack Obama delivered during his DNC appearance on Wednesday.

At one point during his speech, Obama claimed that President Trump “shows no interest in putting in the work, no interest in finding common ground, no interest in using the awesome power of his office to help anyone but himself and his friends.”

“President Trump hasn’t grown into the job because he can’t,” Obama added.

In response, Terrence Williams uploaded his fiery rebuttal to Obama’s comments, where he eventually told the former President to just “Shut up!”

“You are the last person that should be talking about anybody not working,” Terrence said. “You didn’t do nothing!”

“But you got the nerves to get your narrow behind on national TV and lie and sitting there acting like you was Mr. Workaholic — you was Mr. Lazyholic. You didn’t do nothing,” he added. “But you wanna talk about Trump?”

“Everybody knows Donald Trump works hard,” Terrence said. “We all know that, even the haters.”

Then after laying out his case and point, Terrence ended by saying, “Respectfully Barack, I wanna tell you to shut up! Shut your mouth! We don’t wanna hear from you no more. Shut up! Shut up. And I normally don’t tell people to shut up, but I’m telling you to shut up.” Video Below

OBAMA IS THE BIGGEST JOKE

We leave you with two more tweets Mr. Williams posted in reaction to the third night at the Democratic National Convention:

Terrence Williams Shows How Epstein’s Death Was ‘Shady’ With A Roll Of TP: ‘Scooby-Doo & Blues Clues Can Solve This’