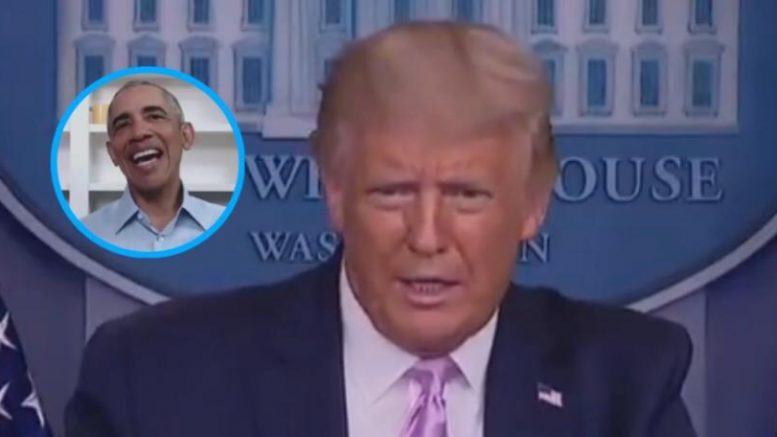 During a Coronavirus Task Force briefing on Wednesday, the Commander in Chief blasted former President Barack Hussein Obama prior to his DNC appearance, in which Obama reportedly plans to criticize his successor as unserious and self-centered during the third night of the Democratic National Convention.

Excerpts from Obama’s prewritten speech were released Wednesday ahead of his speech, and a reporter asked President Donald John Trump for his reaction.

“I never expected that my successor would embrace my vision or continue my policies,” former President Obama will reportedly say in part. “I did hope, for the sake of our country, that Donald Trump might show some interest in taking the job seriously. But he never did.”

President Trump responded: “You know, when I listen to that and I see the horror that he’s left us, the stupidity of the transactions that he made– look what we’re doing. We have our great border wall, we have security, we have the UAE deal, which was universally praised, praised by people that aren’t exactly fans of Donald Trump for various reasons. I don’t know why, it can’t be my personality, but they’re not fans, right?”

He continued: “When I look at what we have, and I look at how bad he was, how ineffective a president he was– he was so ineffective, so terrible, slowest growing recovery in the history of– I guess since 1929 on the economy. Don’t forget, until the China virus came in, we had the greatest economy in the history of the world. And now, we’re doing it again– gonna have to do it a second time.”

“Hard to believe, we’re doing very well. You heard the numbers, they’re way, way down on the virus, but when you look at the kind of numbers that we’re producing, and the stock markets, we’re almost at the level– in fact, Nasdaq and S&P are higher than they were at the highest point prior to the China virus coming in– the plague coming in,” Trump said. Continued Below

“Now President Obama did not do a good job,” the Commander in Chief stated.

“But they did such a bad job, that I stand before you as President,” Trump expressed. Video Below

WHAT A BRILLIANT WAY TO END HIS PRESSER!!!!!

President @realDonaldTrump underscores Obama & Biden’s failures, saying if they had done a good job he would have been very happy and wouldn’t have run for President because he enjoyed his previous life.

BUT HE RAN AND IS PRESIDENT!

(Related: Trump Fires Back At Michelle Obama’s DNC Pre-Recorded Speech: “[I] Would Not Be Here… If It Weren’t For The Job Done By Your Husband”)