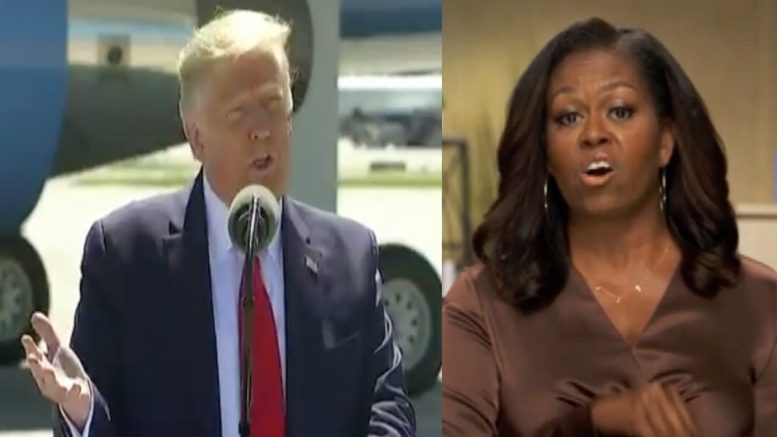 Monday afternoon in Oshkosh, Wisconsin, the Commander in Chief mocked former First Lady Michelle Obama for not delivering a live speech at the Democratic National Convention, where she  instead opted for a pre-recorded video message.

“Why don’t they tell me that? I’ll tape my speech next week, … it’s a lot easier. I’ll make sure it’s perfecto, every word will be perfect. If I don’t do it, I’ll give it five or six goes. I’ll say, ‘Pick the best one’. What is this? They’re taping their speeches. I just learned that her speech is taped, and that most of them are taped,” President Trump said.

“I don’t know, we’ll have to speak to Republican leadership and say, ‘Let’s tape those speeches’. You wanna go to a snooze? You know when you hear a speech is taped, it’s like there’s nothing very excited about it, right?” he asked.

The president confirmed that he will deliver his acceptance speech, as part of the Republican National Convention, at the White House on Thursday, Aug. 27, the final day of the 2020 GOP Convention.

(Related: Right Before Making His DNC Debut, Video Surfaces Of John Kasich Implying That Biden Is A Liar)

The president’s comments come after the Republican National Committee on Monday applied for a permit for fireworks over the Washington Monument, a display that will likely line up with the end of Trump’s speech.

An RNC official told Fox News Monday that the GOP filed a permit to the National Mall and Memorial Parks for an aerial fireworks display that would begin at 11:30 p.m. and end at approximately 11:35 p.m. on Thursday, Aug. 27 — the final day of the 2020 GOP convention, reported News/Talk 1010 WSCI. Video Below

Trump bashes the Democratic National Convention: "These are all taped speeches. Michelle Obama, her speech is taped." pic.twitter.com/DiyxOYrOtA

Meanwhile, Michelle Obama said of Biden in a clip of the pre-recorded speech, “I know Joe. He is a profoundly decent man guided by faith.”

Sen. Kennedy: ‘The Creepy Banjo Kid in Deliverance is More Popular Than the President’