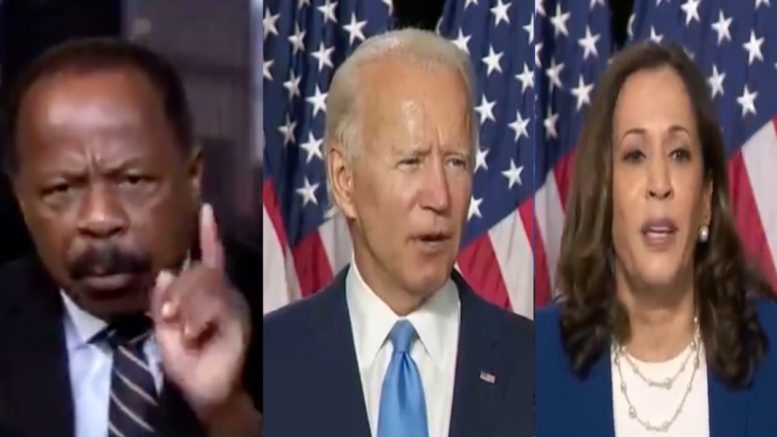 While discussing Joe Biden’s running mate, Leo Terrell said that the former vice president “needs a do over”, because Kamala Harris “gives lawyers a bad name”.

He explained: “She will say and do anything to win. And that is why you cannot believe anything out of her mouth. You saw a different Kamala Harris today at the press conference, and this was a Kamala Harris who wanted to destroy Joe Biden.”

Leo 2.0 went on to warn America about the Democrat Senator: “One last thing, she’s a nasty person. She’s mean. Look what she tried to do to Justice [Brett] Kavanaugh. And when you talk about what she’s planning to do, if I was Joe Biden, I would sleep with one eye open, because she is looking to take over the White House. She’s only in it for herself, period.” Video Below

.@TheLeoTerrell says @JoeBiden better sleep with one eye open because @KamalaHarris Is only in it for herself. pic.twitter.com/cfQvOgYK3D

.@dbongino says no one likes @KamalaHarris. She couldn’t even make it to Iowa in the primary and that’s only Democrats voting. Everyone says follow the science so he’s just giving you the numbers. pic.twitter.com/fOpd8VmG0r

Also during the segment, Leo Terrell did a happy dance because Bongino agreed with him “for the first time” when Leo 2.0 said that Sen. Harris is “disingenuous and she needs to be exposed”, adding, “She is basically a Biden surrogate.”

Bongino responded: “I’m with Leo on this on this one. Who would’ve thought the day that I come on your show, agreeing with Leo? … What is going on here?”

Ok I was excited because Dan agreed with me for the first time! Vote #Trump https://t.co/iGjtw6dV8b

‘Lied his Entire Life About Everything’: Bongino Calls Out Biden for not Being Honest About his Admin’s oil Policies