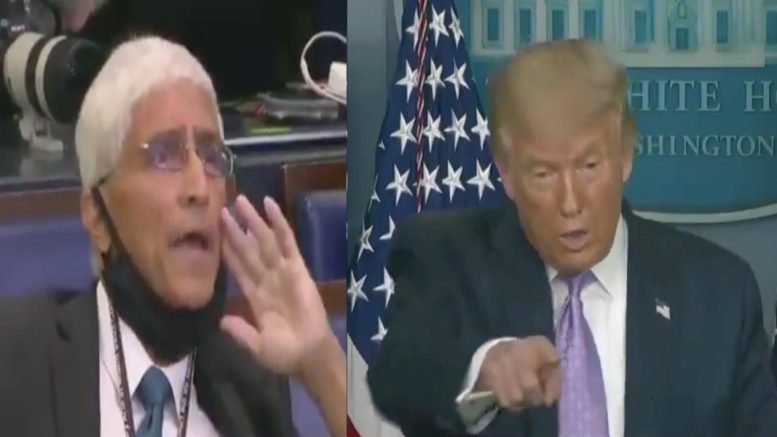 Thursday during the White House Coronavirus Task Force briefing, the Commander in Chief snubbed S.V. Dáte, senior White House correspondent at HuffPost, after the reporter accused the president of lying.

“After three and half years, do you regret at all, all the lying you’ve done to the American people?” Dáte asked the president.

President Trump asked the HuffPost reporter, “All the what?”

“All the lying, all the dishonesties,” Shirish Dáte responded.

The president then asked, “That who has done?”

“You have done,” Dáte alleged. “Tens of thousands…”, which prompted the Commander in Chief to move on to the next reporter’s question.

.@HuffPost Reporter: "Mr. President, after three and a half years, do you regret at all, all the lying you've done to the American people?"

S.V. Dáte later took to Twitter to brag over his question he asked to the Commander in Chief, expressing: “For five years I’ve been wanting to ask him that”.

For five years I've been wanting to ask him that.

We leave you with a few responses:

Lol you waited five years to go full in on outing yourself as a partisan hack and you got ignored.

This guy works for MSM Huffington Post and attempts to call someone else dishonest.

Inflated Twitter ‘Likes’ by phony amplified accounts don’t make up for how big of a moron you just made yourself look like in front of the world.

WE ARE THE NEWS NOW

(Related: Biden Calls For Nationwide ‘Mask Mandate’, Trump Reacts: “He Does Not Identify What Authority The President Has To Issue Such A Mandate”)