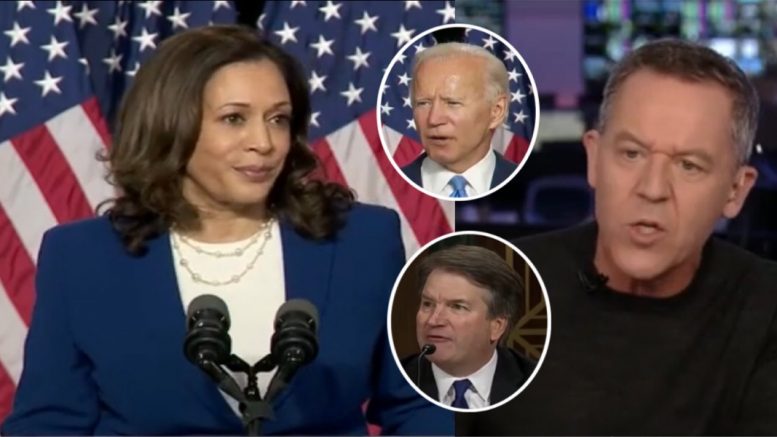 Asked what Senator Kamala Harris “did for herself” during the Wednesday speech she gave alongside Joe Biden, Greg Gutfeld replied: “Well, for one thing, she sold out to cops. That was the thing that really stood out to me that she sold out– she was a cop, but she’s no longer a cop.”

“The other thing is, it is a two way race in the sense that it’s gonna be about race, and it’s gonna be about race,” Gutfeld predicted. “You saw Joe Biden trot out the ‘fine people hoax’, which has already been discredited. Trump wasn’t talking about racists, he was talking about both sides of the statue debate. Anybody with half a brain, i.e. Joe, knows that. And so, he mentions the clan, this from a guy who spoke at a funeral for a clan member, okay? Trump didn’t speak at a funeral for a clansman. Joe Biden did, but I guess we forgot about that.”

Gutfeld was referring to remarks Biden made during his speech in which he accused President Donald Trump of the Charlottesville “very fine people” smear, which has been widely debunked.

“It was a wake up call for all of us as a country. And for me, it was a call to action. My father use to say, ‘Silence is complicity’, not original to him, but he believed it. At that moment I knew I couldn’t stand by and let Donald Trump– a man who went on to say when asked about what he thought, he said there were ‘very fine people on both sides’. No president of the United States of America has ever said anything like that,” Biden claimed.

“Then he said something totally mind boggling,” Gutfeld continued. “[Biden] said that Trump coddled terrorists. And I’m thinking … this is from a guy who’s against taking out [Osama] bin Laden? And Trump got rid of ISIS, [Qasem] Soleimani, and [Abu Bakr] al-Baghdadi. Is he losing his mind, or is he just flat out lying?”

“Lastly, this is why I hate politics. And politics is BS, because it shows you how awful people can be. I’ve heard the Kamala-Beau Biden story– about the strong connection between Kamala and Beau. But I wonder if she knew so much and learned so much about Joe’s character through this close relationship with Beau Biden, why did she say she believed the sex abuse accusers of Joe Biden? And why did she smear him as a racist sympathizer with segregationists if she if she had learned so much from Beau Biden?” he asked, referring to remarks Senator Harris made in her Wednesday speech.

“It’s probably just because she’s lying. If she can make an attack like that on Joe Biden for debate theatrics months ago, it’s reasonable to conclude that the ruination of [Justice] Brett Kavanaugh was also just hearing theatrics– that she will ruin you for political reasons,” Gutfeld predicted. Video Below

Gutfeld added: “If you are new to politics, you’ve learned a sober lesson: It’s complete and utter BS. People will say anything to get power. So what she did was– willing to crush Kavanaugh and crush Joe Biden, but when the door opens up for power, that all goes out the window.”

Gulfeld also noted a CNN article written by editor-at-large Chris Cillizza, who thinks Joe Biden might not go the distance– and may even “step aside.”

Joe Biden made the pick that maximized his chances of continuing to make the race a straight referendum on Trump while also selecting someone whose resume suggests being ready to step in, if and when Biden decides to step aside. | Analysis by @CillizzaCNN https://t.co/Ek4d6sfGfT

Full remarks with “The Five” as they fact-check claims Joe Biden made in a speech with Kamala Harris on Wednesday:

(Related: Leo Terrell: “If I Was Joe Biden, I Would Sleep With One Eye Open, Because [Kamala Harris] Is Looking To Take Over The White House”)