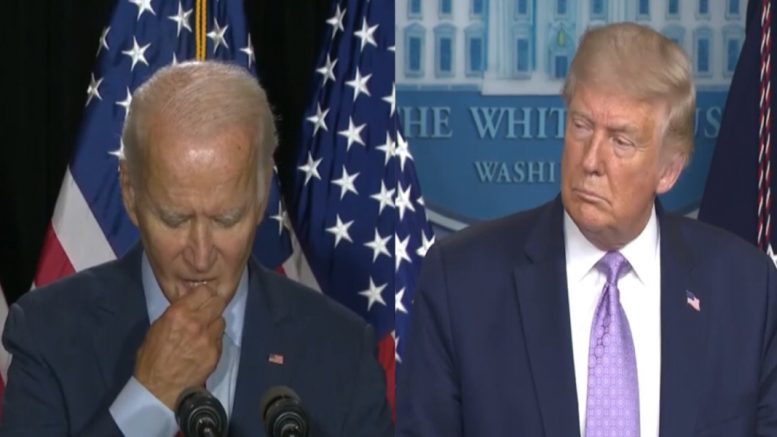 Former Vice President Joe Biden on Thursday called for a nationwide mask mandate to curb the spread of the coronavirus pandemic, without explaining specific details or taking questions from the press.

“Every American should be wearing a mask when they’re outside for the next three months at a minimum,” Biden said in Wilmington, Delaware.

“Let’s institute a mask mandate nationwide starting immediately and we will save lives. The estimates are we will save over 40,000 lives in the next three months if that is done,” Biden said.

BREAKING: Joe Biden and Kamala Harris call for a “nationwide face mask mandate” without explaining the specifics of how that would work. pic.twitter.com/KtXT2PxCkC

Following Biden’s remarks, the Commander in Chief held a Coronavirus Task Force briefing Thursday, slamming the presumptive Democratic presidential nominee for “politicizing a pandemic” and showing “his appalling lack of respect for the American people”.

“At every turn, Biden has been wrong about the virus, ignoring the evidence and putting leftwing politics before facts and evidence,” the president said. “Sleepy Joe opposed both the China and Europe travel bans, you know that. He opposed the China travel ban that I instituted very early, and the Europe travel ban that I instituted quite early. If we had followed– and I had listened to his advice, hundreds of thousands of more people would have died. This is according to many people. I believe that Dr. Fauci agreed with that. He said, ‘President Trump made a great decision when he put the ban on China.'”

“Joe Biden wants to fling open American borders, allowing the pandemic to infiltrate every U.S. community based on his policies. He wants to have ridiculous open borders. I’ve been saying since the first day I started campaigning for this great office that if you have open borders, you don’t have a country. … He wants open borders, the Democrats want open borders. … The wall is getting close to 290 miles long that’s having a huge impact. So we disagree with him on that. That’s one of the many different things we disagree with. Continued Below

“But while Joe Biden would allow rioters, looters, and criminals, and millions of illegal aliens to roam free in our country, he wants the federal government to issue a sweeping new mandate to law abiding citizens. He wants the President of the United States, with a mere stroke of a pen, to order over 300 million American citizens to wear a mask for a minimum of 3 straight months. … I guess he thinks it’s good politics. No matter where they live and no matter their surroundings,” the president continued.

The Commander in Chief declared: “He does not identify what authority the president has to issue such a mandate or how federal law enforcement could possibly enforce it, or why we would be stepping on governors throughout our country, many of whom have done a very good job, and they know what is needed. … Our governors have worked very hard. They’ve worked with Vice President Pence and myself and everybody else that’s been going.” [Emphasis added].

The Commander in Chief said that his “administration has a different approach”, explaining, “we have urged Americans to wear masks.”

“I have emphasized this is a patriotic thing to do,” the president said, referring to comments he made last month. “What do you have to lose? We’ve been saying wear them when it’s appropriate, especially in terms of social distancing if you can’t distance enough. And what do you have to lose? But again, it’s up to the governors. We want to have a certain freedom. … That’s what we’re about.”

The president went on to say that his administration is implementing a plan “based on facts and science”, adding: “We will continue to urge Americans to wear a mask when they cannot socially distance, but we do not need to bring the full weight of the federal government on law abiding Americans to accomplish this goal.”

“Americans must have their freedoms, and I trust the America people and their governors very much. … And Joe doesn’t. Joe doesn’t know too much. Unlike the Biden approach, our approach is guided by science. … Sleepy Joe rejects the scientific approach in locking all Americans in their basements for months on end. … He wants to shut down our economy, close our schools and grind society to a halt, and he wants it done by a federal decree. This would lead to a crippling, long-lasting depression,” he added. Continued Below

The president also explained that everything Biden is essentially calling for, the Trump administration has already implemented.

“Every single thing he said to do, every single thing, we did, and we did them well. Biden has no idea on his own. He only knows what he thinks we should do, and he spews it out. … I guess you could say he plagiarizes and he really did in our case, because every single one of the events was something we had already done. We’ll defeat the virus, but not by hiding our basements. He’s gotta come out of his basement. We’ll defeat this virus through a common sense mitigation effort, shielding those at highest risk and unleashing America’s scientific genius,” he said.

“To Joe, I would say stop playing politics with the virus, too serious. Partisan politics has no place here. It’s a shameful situation for anybody to try and score political points while we’re working to save lives and defeat the pandemic. … Americans must unite together and put politics aside, and really have to unite for a common good,” the Commander in Chief explained. Video Below

(Related: Tucker Blasts Dr. Fauci For Taking Off Mask At Baseball Game: “Masks For Thee, But Not For Me’)