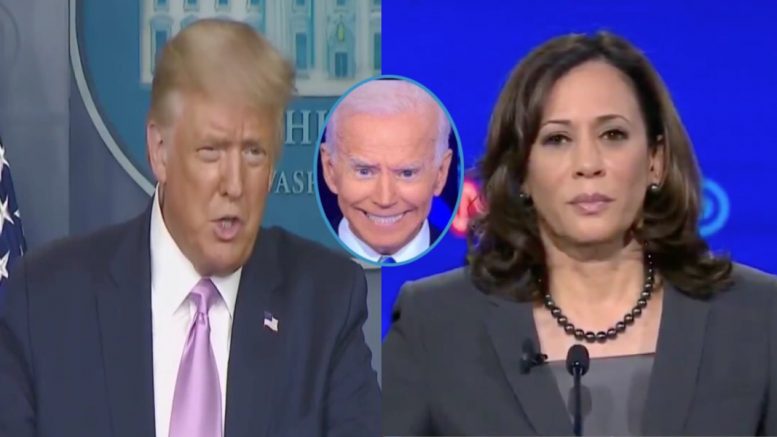 Right before the briefing, the president had tweeted a video ad, calling the Democratic Senator “phony Kamala Harris.”

“Regarding Senator Harris’ record, you had a pretty quick response to that with an ad out that said she was a phony. And I wanted to ask about a specific example that a lot of people thought was a phony moment. As San Francisco [district attorney], she oversaw, according to the Mercury News, she saw 1900 marijuana conventions. But she was asked in an interview last year if she had smoked marijuana, and she appeared to joke, and according to some people lie, and say she was listening to Snoop Dog and Tupac, while their music hadn’t come out at the time, while she said she was smoking pot and listening to it. Why would she lie about that?” a reported asked the president.

The reporter was referring to when Kamala Harris did an interview with The Breakfast Club in February 2019. Harris admitted that she smoked a joint in college and proudly announced that she “inhaled”, saying, “I just broke loose. … I think it gives a lot of people joy. And we need more joy.” She also claimed that she remembered the high from that joint.

The Commander in Chief responded to the reporter, blasting Kamala Harris: “Well, she lied. She said things that were untrue. She is a person who has told many, many stories that weren’t true. She’s very big into raising taxes. She wants to slash funds for our military at a level that nobody can even believe. She is against fracking, she’s against petroleum products. … She’s in favor of socialized medicine, where you’re gonna lose your doctors, lose your plan. She wants to take your healthcare plans away from 180 million Americans.”

The president admitted that Senator Kamala Harris was his “number one pick”, adding: “As they would say … she was my number one draft pick. And we’ll see how she works out. She did very, very poorly in the primaries, as you know. She was expected to do well, and she ended up right around two percent, and spent a lot of money. She had a lot of things happening.” Continued Below

The president said he was “a little surprised that he picked her”, noting that he has “been watching her for a long time”.

He reiterated: “She did very poorly in the primaries and now she’s chosen. So let’s see how that works out.” Video Below

President Trump reacts to the news that Joe Biden has picked Kamala Harris as his running mate pic.twitter.com/uMLIAlnnOt

Throwback to when @TulsiGabbard annihilated @KamalaHarris

(Related: Terrence Williams On Biden’s Choice For VP: “He Chose Kamala Harris Based On Color & Not Character”)