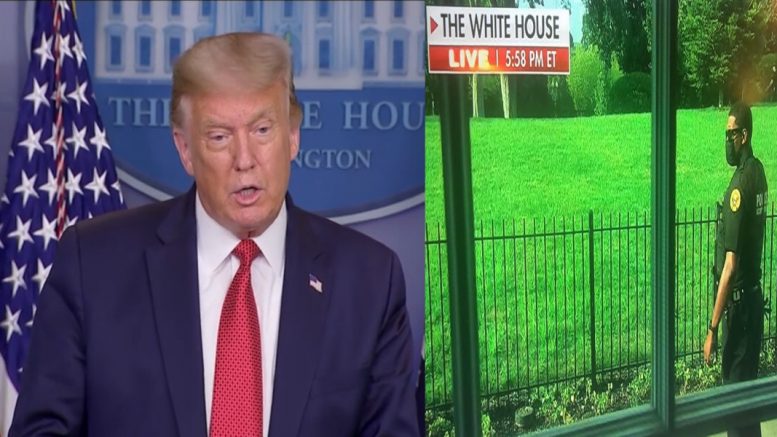 During a White House Coronavirus Taskforce press briefing on Monday, the Commander in Chief was abruptly escorted out out of the briefing room just a few minutes after taking the podium.

President Donald Trump quickly returned to tell reporters, “There was a shooting outside of the White House.”

President Trump being escorted out of the White House briefing room:

BREAKING: President Trump was just whisked out of the press briefing room by a Secret Service Agent in the middle of his news conference. pic.twitter.com/hrbKZNlaCH

The Commander in Chief returned to the White House briefing room to tell reporters what he knew about the situation.

He said: “There was a shooting outside of the White House and it seems to be very well under control. I’d like to thank the secret service for doing– they’re always quick and very effective work. But there was an actual shooting, and somebody’s been taken to the hospital. I don’t know the condition of the person. It seems the person was shot by secret service, so we’ll see what happens.”

The president said he did not know the details as he had just found out, but confirmed it was “outside of the White House”. He added: “They’ll have details for you in a little while”. Video Below

“It seems that the shooting was done by law enforcement at that person, at the suspect” the president said. “It was the suspect that was shot.”

President Trump confirms that an armed individual was shot by Secret Service outside of the White House and the person was taken to the hospital pic.twitter.com/Itwwqt2mNh

Asked if he “was rattled by this at all”, the Commander in Chief told the reporter, “I don’t know? Do I seem rattled?”

REPORTER: “Are you rattled by this at all?”

TRUMP: “Do I seem rattled?” pic.twitter.com/oFDcinLKrU

*Update at 6:09 PM Central. Video footage surfaced of law enforcement outside of the White House controlling the situation:

The Secret Service can confirm there has been an officer involved shooting at 17th Street and Pennsylvania Ave. Law enforcement officials are on the scene. More information to follow.

Tucker Carlson: ‘This Show has Obtained a Subpoena From Merrick Garland’s DOJ Issued in the Past Week’