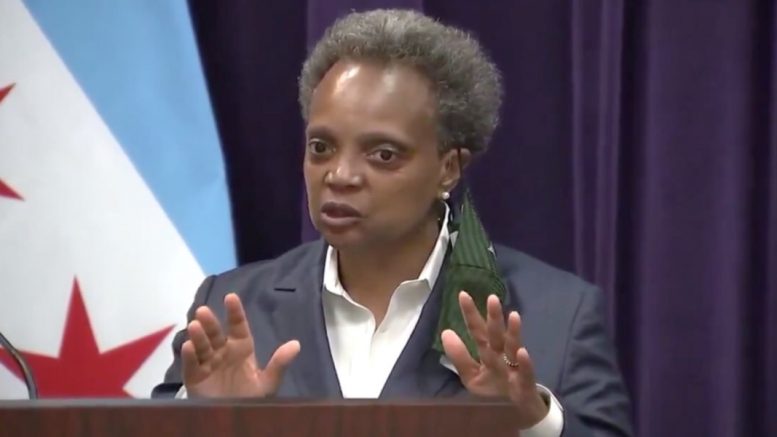 Chicago Police Superintendent David O. Brown told reporters during a news conference Monday “these looters acted as if there are no consequences for their behavior”, suggesting that the looters took advantage of the lack of consequences seen in the riots and looting after George Floyd’s death.

The unrest began at around 12:20 a.m., when police were called to reports of a mob scene on Michigan Avenue. Large crowds gathered outside the Saks Fifth Avenue and Coach stores, with hundreds of people yelling and throwing things at officers, per NBC 5 Chicago.

During the Monday news conference, Superintendent Brown told reporters: “These looters acted as if there are no consequences for their behavior. And they based that on what happened previously, that we made a lot of arrests during May and June, and not many of the cases were prosecuted to the fullest extent. … We have to have consequences for the arrests that the Chicago Police Officers make– through great threat to their own safety.”

“They are being shot at to make these arrests,” he continued. “And these looters, these thieves, criminals are emboldened by no consequences in the criminal system. They get released, many charges get dropped. They feel emboldened to do it more. … That is not a consequence of the officers not making arrests. … The consequences are once prosecution and sentencing comes up, there’s no consequence. We would argue that– let’s have the criminal justice here deliver a strong message to these criminals– that there will be consequences for your behavior.”

A reporter told Superintendent Brown: “It almost sounds as though you’re saying this is– the reason [this is happening] is because the courts and the prosecutors were not doing their job, they were going too easy on the looters from the last time around. Is that my understanding?”

Chicago Mayor Lori Lightfoot stepped in, snapping on the reporter: “Craig, let’s be clear. Don’t bait us, okay? No, no. Do not bait us. This is a serious situation.”

She went on to say: “People are concerned about their safety. Officers are concerned about their safety. So don’t bait us. What we are saying is as a result of what happened last night, there have to be consequences. We’ve got teams of people that are aggressively out there identifying the people responsible, looking at the plates, and we’re gonna bring them to justice”. Video Below

Lightfoot added: “But when we do, and we do make those arrests, our expectation is that this is gonna be treated with a level of seriousness that it should be, period. Don’t try to bait us, mischaracterize, pit one against another, we’re not playing that. We are in a serious situation here, and we need a serious response, that’s what we’re saying, period.”

The reporter responded by telling Lightfoot: “I’m not trying to bait you ma’am.”

Superintendent David Brown: These looters acted the way they did because they feel emboldened by the lack of consequences of arrests in the past months.

"We have to have consequences for the arrests that Chicago Police officers make". pic.twitter.com/004MyYIRjo

On July 17, Lori Lightfoot told reporters that the “mayors are getting it done” after President Trump offered to send in Federal Law Enforcement:

“The Mayors are getting it done.” pic.twitter.com/Bjm2LqO1Mk

Meanwhile, Lightfoot recently criticized the “reckless behavior” of White people who had gathered at Montrose Beach, informing them on Twitter there is a “pandemic”.

Meanwhile, this is the “reckless behavior” @chicagosmayor Lori Lightfoot is concerned with https://t.co/cVnCToIHxk pic.twitter.com/oLL1Iem5PY

Hundreds of people smashed windows, stole from stores and clashed with police overnight in Chicago's Magnificent Mile shopping district and other parts of the city's downtown. https://t.co/HrDCLtBUXd pic.twitter.com/sanXXVYGx2

(Related: Mayor Lightfoot: “Under No Circumstances Will I Allow Donald Trump’s Troops To Come To Chicago”)